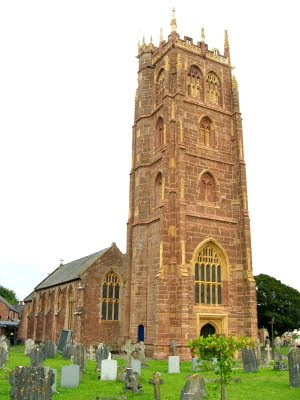 Bishops Lydeard (pronounced 'Liddy-ud') is a small village north west of Taunton, today as well as known for anything as the start of the West Somerset Railway. But it has a church, prominently sited in the middle of the village, well worth visiting. I'm biased in this case, as I have family connections with it going back to the 18th century, but I hope the photographs speak from themselves.
History

There has been a church here since Saxon times, although the earliest part of the present structure, the north arcade, dates from the end of the 13th century. But it was subject to a major rebuilding in the 1450s, when the present tower was erected - one of the famous Perpendicular Gothic Somerset towers. Much of the interior (and the Chancel in particular) was rebuilt by the Victorians, but the rood screen and pew bench ends date from the 16th century and themselves form a rare example of an extensive woodwork scheme from this period. The tower has very recently been restored to its full glory.

From the outside, the tower dominates the expansive churchyard. Of four stages, it is a beautiful composition executed in the local blood-red sandstone, with detailing of golden yellow Ham stone. The windows, bell openings, pinnacles and buttresses are carefully balanced, and filled with delicate Somerset tracery, leading to a crown of pierced battlements. On the south side of the nave aisles is a surviving rood turret.

Inside, the windows and chancel arches were heavily restored by the Victorians, but the furnishings are outstanding. First is the early 16th century Rood Screen, which runs across the nave and both aisles. It is richly carved, with the Apostles Creed (in Latin) running along its length carved in Gothic script. It was recoloured by Comper, who also restored the Rood itself above, the gilded reredos, with its ornate gilded canopy.

Next, and equally impressive, are the bench ends, carved by itinerant Flemish carvers around 1540. The backgrounds are simply coloured to highlight the compositions; these include a

charming windmill, with a miller, his horse and three birds; a pelican piercing her beast to feed three hungry chicks (an early Christian motif); a fine sailing ship; frolicking rabbits watched by a donkey; a handsome stag in the forest; a heart pierced with two arrows; a passion; and some fine Green Men (depictions of forest deities with foliage coming from their mouths).

The pulpit is Jacobean and the font Perpendicular, with a panelled stem and complex panelled tracery. Except for a few fragments, the heavy stained glass is entirely Victorian.