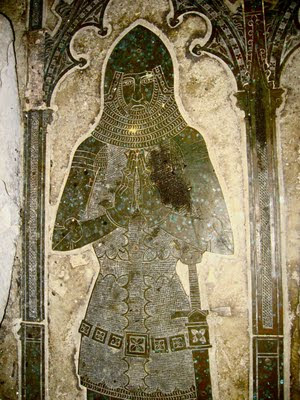 Fletching is a pretty village, a few miles north of the A272 between Hayward's Heath and Uckfield. The impressive church dominates the centre of the village and has many historically and interesting fittings.

Although not mentioned in the Domesday book, the details of the tower indicate a date on the cusp of the Saxon-Norman overlap, probably late in the 11th century. The church was enlarged in in the Early English style 1230, but substantially rebuilt in 1340, when it acquired its present dimensions, leaving the tower as the only significant Norman remnant. It was restored by John Oldrid Scott in 1880, who remodelled the chancel into its present form.

It was witness to an important event in English history, when in 1264 Simon de Montfort prayed and attended mass here the night before the Battle of Lewes, where he defeated the forces of Henry III.

The church sits in an expansive churchyard on a mound in the middle of the village, surrounded by mature trees. The most notable feature is the tower with its shingled spire. The bell openings in the tower are early Norman, as is the slim buttress on the north east side. The spire and deep corner buttresses date from around 1340. Entry into the church is via the south porch, built in the 15th century, and through the original 15th century door, which has Perpendicular Gothic decoration.

Inside, the church is dark thanks to the extensive scheme of Victorian stained glass. The plan is cruciform, with an aisled nave and a long chancel, making the church over 140ft long. The nave arcades, transepts and chancel date from the early 13th century. The arcade arches rise as they get nearer to the crossing, and there is a squint from the north transept into the chancel. On the south arcade can be seen remains of early Norman windows; the clerestory windows date from the 1340 rebuilding. The tower door is of Saxon dimensions, but renewed by the Victorians. The East window, although restored in the 19th century, is said to be based on the original late 13th century design.

The fittings are unusually rich, particularly the monuments in the south transept. Pride of place goes to the tomb chest, inlaid with a magnificent and well preserved brass, presumed to be of Sir Walter Dalyngrygge and his wife, c. 1380. He is shown in full armour, his wife in a long mantle, beneath elaborate Gothic canopies. The tomb originally had a vaulted canopy, but this was lost after 1820.

Close by is a humble but unique brass, consisting of a name plate above a pair of gloves, to Peter Denot, a glover. It has been dated to the 1450s. He took part in Jack Cade's Rebellion of 1450 but was pardoned

The largest tomb is that of Richard Leche (d. 1596), High Sheriff of Sussex and Surrey, and his wife Charitye. This is a splendid affair in alabaster, with the effigies of excellent quality (and in a remarkable state of preservation). The charity he established for the poor of the parish is still in operation today. His wife married again, but the second marriage was said to be unhappy, and she chose - unusually - to be included in her first husband's memorial, while she was still alive.

Other items of interest include the Jacobean pulpit; four funeral hatchments to different members of the Sheffield family; funeral armour (helmet, gauntlets, swords and spurs) of members of the Nevill family, the Earls of Abergavenny, dating from around 1720. The East and south transept windows have Victorian glass by Kempe.

An unusual feature is the mausoleum added on to the north side of the north transept for the Earls of Sheffield (who lived at nearby Sheffield Park) in the late 18th century. The mausoleum was also the burial place of Edward Gibbon, author of _The Decline and Fall of The Roman Empire_ and a close friend of the first Earl.