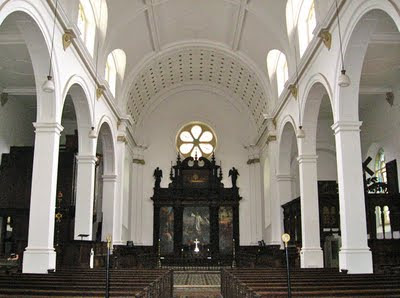 Now in the care of the Churches Conservation Trust, St Thomas the Martyr has a particularly attractive 18th century interior and fittings regarded by some as worthy of a London Wren church.
History

Founded at the end of the 12th century, the church served the population of a new district of Bristol, south of the main bridge. Originally dedicated to St Thomas a Becket, the dedication was changed after the Reformation on orders of Henry VIII (who forbade the veneration of the saint who defied his king).

The church was rebuilt at the same time as St Mary Redcliffe in the 14th and 15th centuries, and was reputedly one of the grandest of Bristol's churches, filled with altars and chantry chapels. However, by the 1780s, the fabric was in such dangerous condition it was decided to build a new church. The architect chosen was James Allen, and the building was built 1789-1796. Allen had intended to alter the west tower to match, but a lack of funds meant that the handsome Perpendicular Gothic tower from the 15th century survives.

Allen's design has a plain classical exterior: only the east end is rendered in stone, as the sides were originally hemmed in by buildings. This has a pretty Venetian motif, with a small circular window of 1879, under a pedimented arch decorated with garlands, and a handsome classical door. At the west end, the handsome 15th century tower dominates the rather soulless modern square.

Inside, the nave has five bays resting on square pillars, with a tunnel vault and clerestory. The aisles have tall arched windows. Allen retained many of the furnishings from the previous church. The reredos of 1716 has fine Corinthian columns and pilasters, decorated with carvings of wheat, vines and flowers of the highest quality. The original panels containing the Lord's Commandment were replaced in 1907 by paintings by Fritz von Kampf of Clifton, depicting biblical scenes. The Communion rails are 18th century, and the carved oak pulpit dates from 1740.

The organ case is by John Harris and dates from 1730, and again has excellent carvings of foliage and cherubs' heads. At the west end, again surviving from the earlier church, is the original organ gallery, with Roman Doric columns. Beneath this are two sculptures of saints taken from the former Long Row almshouses. On the north wall are the Royal Coat of Arms of Charles I, (1637) and on one of the nave columns an elaborate early 17th century sword rest. The late 18th century mahogany font was converted into a lectern in 1878, replaced by a rather cumbersome stone design.