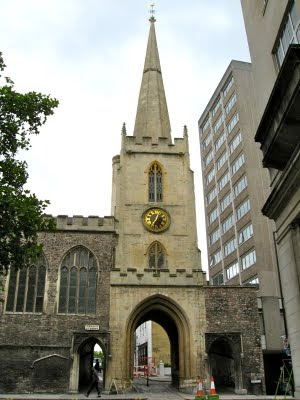 Framing the end of Bristol's Broad Street, St John's is a rare surviving mediaeval church gate, complete with an extensive crypt and interesting furnishings. It is now in the care of the Churches Conservation Trust (CCT). Such church gates were used by travellers to pray for safe passage before travelling, and afterwards for thanksgiving for returning safely home.
History

St John's is the only survivor of the five gate churches that once lined Bristol's inner Saxon town walls. Built originally in the 12th century, there was once another church, dedicated to St Lawrence, on the other side of the tower (which it shared). St Lawrence was deconsecrated and sold in 1580, and demolished by 1824.

The crypt dates from two building phases in the 14th century, and had a separate dedication to the Holy Cross. The second phase, as well as the nave, which also dates from this period, was paid for by William Frampton, (d. 1388). The two-bay chancel was built c. 1480. The church was used for worship until 1984 and was passed to the care of the CCT in 1985.

The church also had an outlet of the St John's Conduit, built in 1267 to supply water to a Carmelite Priory on the site of the present Colston Hall. This originally came to a conduit house inside the gate, but was moved to its present position on the Quay Street side in 1827 and restored in 1866.

The church and crypt

The exterior is dominated by the tower and the gate. The central gateway and tower dates to the 14th century and on the Broad Street side incorporates statues of Brennus and Bellinus, legendary founders of Bristol. The two outer walkways and the present church entrance on Nelson Street are Victorian alterations. The gateway is vaulted and the groove of the portcullis are clearly visible in the main arch. To the East, the tall Perpendicular Gothic windows of the nave characterise the nave and chancel.

The crypt entrance is in Quay Street. The crypt is low, with vaulted ceilings, and the division between the earlier eastern part and the later western part. In the eastern part is a rather defaced but still impressive merchant's tomb with alabaster effigies of him and his wife, with ten kneeling children in panels below. Next, under an ogee arched and crocketed canopy, is the tomb with an incised cross of Thomas White (d. 1542), Mayor of Bristol in 1530, and his wife. A tomb chest in the western part has incised figures of a man and his two wives, next to a damaged piscina.

The church is now entered by a door in Nelson Street, through the Victorian narthex. The nave is a great surprise after the crypt: the six regular tall bays and windows fill the church with light, giving it an unexpectedly spacious feel. The last bay is higher and has two clerestory windows, presumably to light an elaborate rood screen. A tall, sweeping chancel arch leads to the two-bay chancel, which has a peculiar battlemented Tudor screen on the east wall, behind where the reredos once stood. This wall was formed in 1570 to form a vestry behind.

The furnishings are particularly rich. At the West End is a gallery dating from the late 17th century, with square fluted pillars, and paintings of saints in the Dutch style. The screen incorporates two fine 16th century carved doors. Next to this is the elaborate font, dating from 1624, with no fewer than 24 panelled faces, decorated with 16 cherubs and 8 rosettes, standing on four clawed lions' feet. The nave pews date from 1621, but were remodelled by the Victorians. The tall nave windows are clear except for fragments of mediaeval stained glass.

In the chancel are two impressive monuments: that of the donor Walter Frampton (d. 1388) has an excellent life-like effigy with angels and a long-tailed dog. On the opposite wall are well preserved brasses to Thomas Rowley (d. 1478) and his wife. Other items include the fine Communion table (1635), Communion rails (late 17th century), lectern (c. 1690) and an 18th century sword rest.

Before you leave, look down - the chancel has a particularly fine decorated floor of colourful Minton tiles.