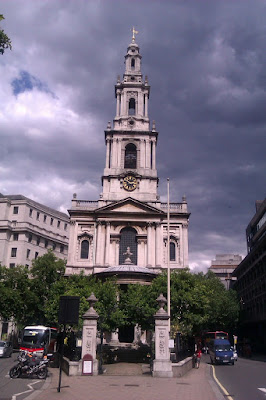 'Often said to be the loveliest Baroque church in England', is how the church guide proudly describes this beautiful building, one of London's most distinctive landmarks.
History

The original parish church was built to the south of the present building, but was demolished in 1549 when the Duke of Somerset built the first Somerset House. At that time, the Strand was the main road between London and the then separate settlement of Westminster, and its name reflects the fact it followed the original shoreline of the Thames.

The present church was designed by James Gibbs (1682-1754) and built between 1714 and 1723. Gibbs was trained as an architect in Rome, and many of the architectural elements are based on churches there. Unusually, it survived the Second World War almost intact and, although the exterior is in good condition - the spire was completely rebuilt in 1984 - the interior is in need of further restoration. It is also something of a traffic island, although the interior is remarkably quiet.

The exterior is one of the grandest in London, despite its relatively small size: it has two storeys of superimposed orders, the lower storey Ionic, the upper Corinthian, with nave windows only in the upper storey. Carvings of fruit, garlands and cherubs adorn every side, but the dominant feature is the famous west tower, of three stages, each set back, above a grand pediment over a curved portico.

The interior is easily a match for the outside: Corinthian pilasters and columns abound, rising to a richly decorated coffered ceiling. The sanctuary is an equally lavishly decorated apse, framed by a dramatic double-height arch. Furnishings include paintings in the sanctuary by the American artist Mather Brown, completed in 1785, and a magnificent pulpit, said to be the work of Grinling Gibbons.