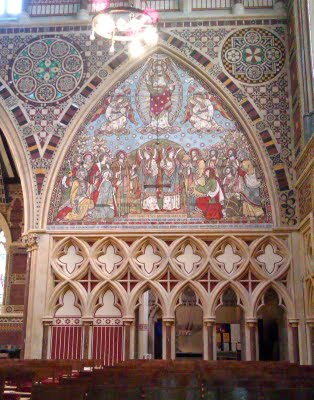 All Saints, located a stone’s throw from busy Oxford Street, is renowned among aficionados of church architecture: built in 1849-51, this shrine to Anglo-Catholicism was a landmark in the development of Victorian Gothic architecture.
The church was commissioned by the Cambridge Camden Society (which later became the Ecclesiological Society) and paid for largely by Alexander Beresford-Hope, son-in-law of the Marquis of Salisbury and later an MP. The architect chosen was William Butterfield (1814-1900). His design, which made clever use of the cramped site, also demonstrated that architecture and lavish decoration could work together to enhance the worship within.

The style is 13th century Gothic, the modest floor plan enhanced through the use of height and the celebrated decoration: in addition to the usual decorative carving, every surface is adorned with mosaics, tiling and murals – including the floor and roof. All this is set off with lavish gilding on the details. The furnishings – too numerous to mention individually – continue the theme of richness and quality.

The chancel is described in the church guide as ‘one of the most sumptuous and dramatic in London’, and is dominated by the brilliantly coloured reredos, completed by William Dyce in 1853-9, but reproduced on wooden panels by Sir Ninian Comper in 1909 when the original had been damaged by pollution. Comper also designed the ornate reredos for the Lady Chapel, of Caen stone and alabaster, in 1911.

The exterior is rather modest in comparison, though also decorated through the use of polychromatic brickwork and stone detailing, and is dominated by its spire, which rises 227ft.

The church is today equally famed for its high Anglo-Catholic style of worship, with generous use of incense and glorious music.