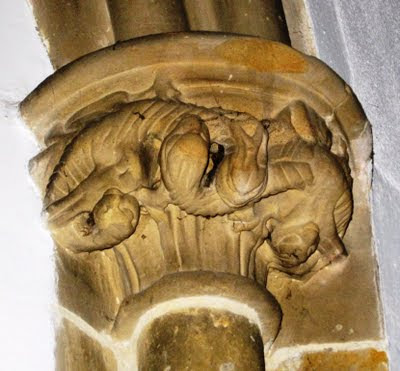 Although Chailey is recorded in the Domesday Book, the first reference to the church is in a 13th century will of one Richard de Plaiz in 1269. The chancel, with its lancet windows dates from the 13th century, as does the tower, and there is 14th century work in the south aisle. It was substantially enlarged with the addition of a new north aisle in 1846, and a further north aisle was added in 1878.

The dominant feature from outside is the robust tower, capped by a substantial pyramidal cap. The chancel shows evidence of Victorian restoration, but the three northern lancets and east window are from the original 13th century design. The south aisle is believed to date from around 1350, and contained a gallery used by the servants of the Hooke and Ades estates, removed in 1878.

Two of the most interesting features can be seen in the chancel, where the shafts of the rere-arches of two of the north wall lancets have interesting capitals: the westernmost one shows a ‘Green Man’, spewing foliage from his mouth, while the easternmost has two entwined serpents biting each other. Four of the tower’s bells date from 1737, with additional bells cast in 1818 and 1882.