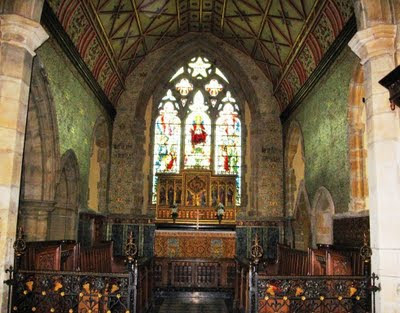 St Mary’s is one of those churches which rewards careful study, of what is an unusually complex building history. Tucked off a lane to the east of the present (and very modern) expanse of the village, it has a lovely churchyard overlooking fields, sheltered by two particularly fine cedars.
The oldest part of the present building is the south nave wall, either side of the porch, which contains an original round-headed window. The church guide dates this to around 1080. The porch and tower are also mediaeval, the porch from around 1400 (still with some original roof timbers) and the tower a robust 15th century Perpendicular design with angled buttresses. In 1836 a north aisle was added.

However, in 1886-7, under the careful and sympathetic guidance of John Oldrid Scott (1841-1931), the chancel was taken down and rebuilt further east, and both the nave and north aisle were extended to match, doubling its size and altering its proportions from those of a humble village church to the impressive building we see today. Thus the chancel, although largely Victorian, retains late 13th century details in the bar tracery of three of its windows (a fourth was reset in the choir vestry).

Many of the most distinctive features belong to Scott’s work: at the east end of the north aisle, an unusual setting of twin gothic arches leads to the choir vestry. More impressive still is the chancel itself. This has a complete Victorian decorative scheme of high quality, with elaborate and rare encaustic wall tiling, above which are walls patterned with stencil designs, all covered with a wagon roof, also with stencil designs. Further decorative work is found in the beautiful, delicate wrought iron chancel gates.

The other furnishings of note are pre-Victorian, and include fragments of mediaeval stained glass in the chancel windows, a Decorated Gothic font with ogee panels, and a dignified Jacobean pulpit topped with a sounding board.