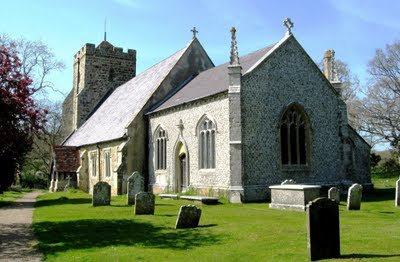 This pretty and unusually village church sits at the end of a long lane from the crossroads in the centre of the village, set in a spacious churchyard.
History

The area has been settled since Palaeolithic times, with a continuous history through the Bronze Age, Roman and Saxon periods. First mentioned in the Domesday book, it is probable that there was a church here in Saxon times.

The present building, however, is firmly 13th century, with a fine 15th century tower and chancel arch, and a chancel replaced in the 18th century, in an early example of the ‘Gothick’ style. The tower in particular is of interest, one of a number in the area financed by the local Pelham family, and the west door carries the distinctive ‘Pelham buckles’ as label stops – recalling the tradition that Sir John Pelham and another knight captured the French King at the battle of Poitiers in 1356, for which Pelham was awarded the buckle of the King’s sword belt.

The church has a very wide, unaisled nave leading to a chancel in the east and the tower room in the west. Two lancet windows in the nave date it to the 13th century, but the others are later perpendicular Gothic, along with the tower and chancel arches. The nave roof has fine old tie-beams and king-posts.

The chancel is sizeable, square and rather bare inside; the east window is a decent attempt at Perpendicular, but the two south windows have very odd tracery, with round-headed arches with hexagonal upper lights. Between them is a priest’s door, framed on the outside by a most impressive ogee arch. Other external details of interest include large, diagonally set crocket pinnacles and a band of quatrefoils on the jambs.

Furnishings of note include two helms, one Tudor from about 1540, and one from about 1660. These may have carried at a knight’s funeral or hung above his tomb. Behind the altar, the screen incorporates the tracery of the mediaeval rood screen within more modern wooden panelling. There are piscinas and aumbries in the nave, indicating the place of nave altars.

Memorials of note include an impressive war memorial, and several to the Pelhams between the 17th and 19th centuries, including one to Sir James Pelham (1792-1873), Lord Mayor of London (1848), which includes a pretty carving of a ship, recalling his naval career.