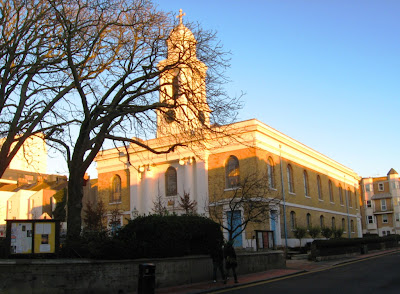 St George’s church is one of Kemp Town’s major landmarks. Built towards the end of the Regency architectural period, it is one of Brighton’s oldest churches still in active use. The crypt houses a cafe and community centre.

The church was commissioned by Thomas Read Kemp MP, the developer of Kemp Town, to designs by the architect Charles Augustin Busby. Begun in 1823, it was opened in 1826. As well as religious motivations, it was partly a speculative venture, as Kemp hoped to receive a good income from the pew rents. In this regard it seems to have been something of a failure, as it was sold in 1831 to Laurence Peel, son of Sir Robert Peel. It became a parish church in 1879.

On Peel’s death, his heirs sold it to the congregation, and shortly thereafter to the Church Patronage Society. In the early 1890s the church was altered by erecting a chancel at the east end, and replacing the interior columns which support the balconies and roof.

During the 1830s, the church was used by Queen Adelaide, consort of William IV, which made it a fashionable and popular place of worship, necessitating the addition of an upper west gallery. She also donated a range of church plate, still in use today. The Peel family also continued to use the church, which contains a number of their memorials.

Threatened with closure in 1962, the church today has a busy parish life and an active worshipping community, and is also used for regular concerts.

Busby’s design delivered a typical Regency church: it is a sturdy rather than elegant classical design, of yellow brick relieved by stucco work. The main exterior feature is the imposing west end façade, which comprises a pair of giant Ionic columns in antis, flanked by Doric pilasters. Above is a square tower with a Greek-style cupola. There are two tiers of windows throughout. At the east end, the chancel extends forwards slightly and is topped by a simple pediment. An odd feature is East Window, its classical round-arched outline filled with three round-headed arches surmounted by unusual eye-shaped tracery.

The interior is spacious and airy, although the blue-on-blue colour scheme – reinforced by blue upholstery on the chairs in the nave – does rather dominate. The nave has galleries on north, south and west sides, with the additional 1835 gallery high up in the west end. The new 1890 columns (rising from the floor to the galleries, and again from the galleries to the ceiling) have capitals of acanthus leaves, but are too slender for the proportions of the church (the guide describes them as an act of ‘well meaning vandalism’). The ceiling is flat over the galleries, with a generous barrel vault over the central nave space. More successful is the east end, with a handsome classical reredos executed in oak.

Furnishings are limited to memorials (mostly to the Peel family), a relief-painted Royal Arms, and displays of church plate and historical artefacts. On my visit, there was a sizeable crib on display.