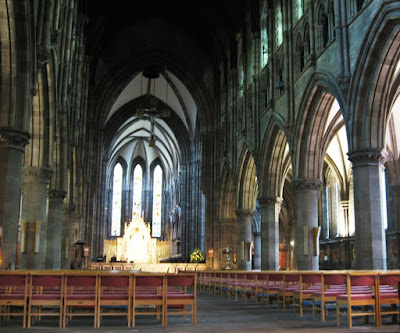 The three spires of St Mary's Episcopal Cathedral form a prominent part of the iconic skyline of Edinburgh, especially when looking west along Princes Street.

The Episcopal Church had been without a cathedral in Edinburgh since the division of the established church in 1689, when the ancient Cathedral of St Giles had come under the Ministry of the Established Presbyterian church. However, the aspiration to build one was only realised in the 19th century, when two wealthy spinster sisters, Barbara and Mary Walker, bequeathed their Drumsheugh Estates to fund the building on a site to the west of the New Town.

An architectural competition was held for the new Cathedral, which was won by Sir George Gilbert Scott, perhaps best known as the architect of St Pancras railway station. The foundation stone was laid in 1874 and the Cathedral completed in 1879, although the towers were added later. Scott considered this his best church.

The church is the largest ecclesiastical building in Scotland, and its three spires - the central spire over the crossing is 275ft high - form a prominent landmark in Edinburgh, although the church itself is actually tucked away, off the City's main thoroughfares in the western part of the New Town.

The design is essentially in Early English Gothic, with Decorated Gothic additions. The layout is conventional, with a nave with aisles separated by arcades of 6 bays, with large aisled transepts and an aisled chancel of 4 bays. The overall impression is of great space and size, with the dark exposed stonework giving it an air of mystery.

Fittings of interest include the pulpit and high altar Reredos, both designed by J Oldrid Scott (son of Sir George); a brass lectern in the form of the Pelican; and a huge hanging Rood, designed by Sir Robert Lorimer (1864–1929) to form part of the War Memorial; and the Millenium Window in the Resurrection Chapel (in the South Transept), designed by Sir Eduardo Paolozzi. There are also excellent encaustic-tile pavements in the Chancel, and fine Victorian ironwork screens, elaborately painted, in the Choir. Most notable, however, is the pew of the novelist and poet Sir Walter Scott (1771-1832), brought here from St George's Episcopal Church, now located in the King Charles Chapel.

The Cathedral boasts a choir that sings daily. A song school was built for them to practice in, in 1885. Designed by J Oldrid Scott, it contains a wooden vaulted roof, painted blue and decorated with gold motifs, while the walls are covered with mural-style paintings by Phoebe Anna Traquair. This building is open to the public, on a limited basis, to view the murals - see website for information on visits.