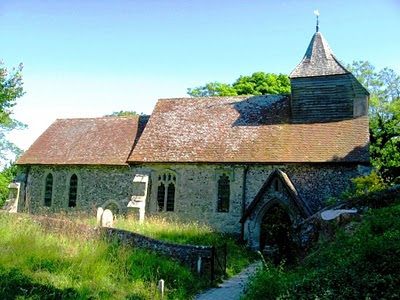 Found at the end of a narrow lane and surrounded by dense woodland, Folkington’s diminutive church, with its intimate interior, nestles in the lower slopes of the South Downs. Its parish today is home to just 60 parishioners.

The church is a simple 13th century building with lancet windows, neither aisles nor chancel arch, and the familiar Sussex flint walls and red tiled roof. Part of the dark king-post roof, as well as the bell turret, may also be of this date. From the 15th century come two nave windows, as well as the attractive octagonal font, with a moulded bowl and panelled stem. The Victorians rebuilt the west wall and inserted the window with Y-tracery.

The nave contains a group of spacious and high 18th century box pews, the seating arranged to face the pulpit, which may be late 18th or early 19th century. The sanctuary contains a cartouche memorial to Lady Barbara Thomas, (d. 1697), with two putti, opposite one to her husband, Sir William Thomas, Bt. (d. 1720), surmounted by his coat of arms, an urn and two more veiled putti.

The inscription reads (in rather odd rhyme):

Outside in the graveyard is the tombstone to Elizabeth David (1913-1992), the cookery writer who did so much to open British minds to continental food. It is carved with vegetables and a cooking pot. Over the wall, a wild garden contains two sculptural images of the Long Man of Wilmington; unlike the original, they stride defiantly forward, proudly displaying their manhood...