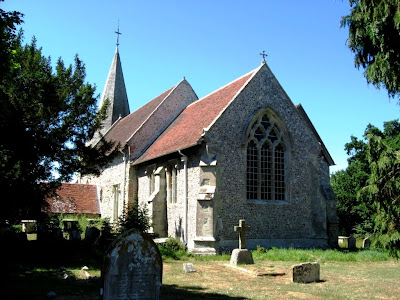 St Pancras is a delightful church set in lush countryside in the Sussex Weald, with plenty of historical interest.

The nave is Saxon, with long-and-short work on three corners, and a window with Roman tiles used as crude voussoirs to form the arch. The north chapel was added around 1200, and the Early English Gothic tower and north aisle in the 13th, though the presence of the chapel arch indicates that an aisle must have been in place when the chapel was built. The chancel was rebuilt in the 14th century, and both the chancel arch and the two arches from the north chapel into the chancel date from this time. The fine king-post roof may also date from the 14th century. The tower arch was renewed in the 15th century, when the solid tower buttresses were added. Two Victorian restorations (in 1868 and 1892) were sensitive and restrained.

The most striking feature of the church as you approach, is its squat tower with tall, shingled broach spire, which can be seen from some way away through the thickly wooded churchyard. From the outside, the Saxon remains on the corners of the nave, and the Saxon window, to the right of the porch, are clearly visible.

Inside, the interior is entirely whitewashed, save for patches of wall painting. The elegant Early English arcade has octagonal piers and leads the eye to an impressive chancel arch, though it is also worth looking up to the roof, picked out by the whitewash. The late 12th century arch from the north aisle to the north chapel has a half dog-tooth motif below the imposts. The windows include the Saxon round-headed window, Early English lancets and Decorated windows. The East Chancel window has particularly fine tracery of arches upon arches, and features head stops on the hood moulding which are said to be of Edward III and his wife, Eleanor.

The fittings and furnishings are of great interest. The robust square font is a good example of 15th century Perpendicular Gothic panelling, and the chancel screen, though Victorian, is a good replica. The wall paintings with lettering left of the chancel arch are Elizabethan, but the flowers and crosses are 14th century. Also from the 14th century are the traces on the north (St Christopher) and south (St George) walls of the nave, though they are now too indistinct to make out their contents.

In the north chapel are several mediaeval grave slabs with crosses, and a niche containing an exceptionally rare 13th century pottery storage jar, found close by. The north aisle has an impressive wooden chest, and the sanctuary a very unusual 14th century piscina with ogees beneath a castellated top. The pulpit is 18th century, as are the arms of George III atop the tower arch.

A short walk from the churchyard south east brings you to the lovely Cuckmere River.