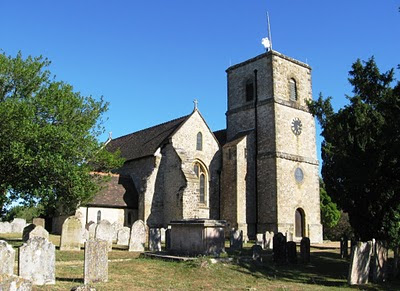 St Mary’s stands at one end of a sprawling churchyard, a few minutes from the village’s main street. The site of a church since Saxon times, the present building is an amalgam of work from the Norman to Victorian periods.

The church is mentioned in the Domesday Book, and the original 11th century Norman nave now forms the north aisle, together with a Lady Chapel, formerly the chancel. A new nave was added in the 13th century, and from this date survive the arch at the east end of the north aisle, and an arch between the present Lady Chapel and chancel, as well as the windows of the north aisle. What is now the north arcade was rebuilt in Perpendicular Gothic style in the 15th century.

In 1731 the original shingled spire was struck by lightning, but repaired so badly that in 1745 it collapsed, bringing down part of the nave. The nave and tower were rebuilt in 1750, though the nave rebuilt in 1843, and again in 1876, when the present south aisle, with an arcade matching that of the north aisle, were added. The chancel was also extended eastwards at this time. The present chancel arch is Victorian: the original chancel arch now rests between the chancel and the vestry.

The church is unusual for this part of Sussex, being built of stone with ashlar dressings, built rather than of flint. The plain but handsome west tower built in 1750 stands over the three gables of the church and aisles.

Inside, the interior is dominated by the nave arcades which, although 500 years apart in date, are happily well matched, with piers composed of four attached shafts. The 13th century arch in the north aisle is pointed but tapered slightly towards the imposts, giving a ‘horseshoe’ appearance.

There is a brass to a former Rector, Henry Wilshaw (d. 1591) on the south chancel wall, and some imposing 19th century wall monuments, including one by the sculptor Sir Richard Westmacott to Sir Henry Hollis Bradford (1781-1816). A Lieutenant Colonel in the First Grenadier Foot Guards, Bradford died at La Vacherie, near Lilliere, on December 7. 1816, of wounds received at the Battle of Waterloo.

In the graveyard, in a small area enclosed by privet hedges, is the grave to the Jesuit Father George Tyrrell (1861-1909). Regarded by some as the foremost intellect among English Jesuits since the Reformation, he was an important Catholic theologian whose modernist views led him to be expelled from the Jesuits and excommunicated from the Catholic Church, although he is now more usually regarded as ahead of his time. The gravestone is an early work of the sculptor and stonecutter, Eric Gill.

Today the church is the centre of a busy Parish life, and on my visit I was treated to some fine change-ringing by local bell-ringers.