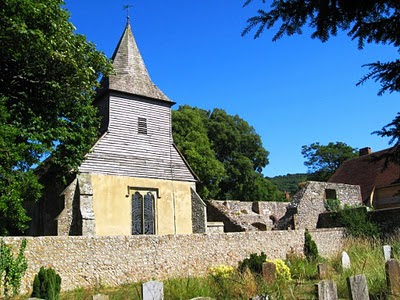 This interesting church was an unusual foundation, built both as village church and to serve the small community of Benedictine monks in the adjacent Priory, founded in the early 12th century.

The church itself has a Norman chancel; the monks would have used the latter (the parishioners restricted to the nave), which still preserves its Norman lancets and low ledges for seating the monks: originally, the floor would have been lower, so making the seating more practical.

The north transept chapel was added early in the 13th century, with the two-bay south aisle following slightly later. This was later partially blocked, but reopened during Victorian restoration. The chancel arch is also a 19th century replacement in the 13th century style.

The nave rebuilt with the fine roof, with kingposts and tie-beams inn the 14th century, and most of the windows renewed in the decorated style. The north porch was added in the 15th century, as well as the Perpendicular East Window.

The best furnishing is undoubtedly the Jacobean pulpit, dating from 1610, complete with a back panel and sounding board, topped off with a fine open-work obelisk. A puzzling, weathered carving set in the south chancel wall, brought in from outside in 1948, is thought to be 12th or 13th century and female (possibly a Madonna holding a diminutive Christ?), though Pevsner felt it more likely to be male. The viewer must decide.

Also of interest are the fluted frieze and steep pediment from an Elizabethan monument in the south aisle, said to have been to a member of the Culpeper family. Finally, in the north chapel is the ‘Bee and Butterfly window’, inserted in 2002 to replace an 18th version, destroyed by a fire. The window incorporates pieces from the original and depicts St Peter surrounded by butterflies and bees, above - appropriately enough - a Phoenix.

Outside, the great Yew tree by the porch is said to be 1,600 years old. Walk around to the churchyard extension for good views of the remains of the Priory Buildings, now part of a private house.