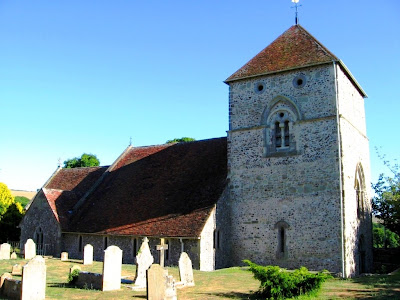 Jevington has an impressive church for a small village, with a well preserved Saxon tower, set in a steep-sided valley running down through the South Downs to the sea.

The tower is obviously the earliest part: although later altered, the remains of the short, robust Saxon windows with Roman tiles as crude voussoirs, and the baluster shaft on the bell openings, are impressive. The date is less certain: the church guide claims 900-950, though others claim a mid to late 11th century date. Inside, the tower arch is also probably 11th century (the openings either side are Victorian).

There must have been a nave here when the tower was built, although the details of the present nave – for example the south porch – date from around 1200. The chancel was built around 1230, although the East Window is later in date, around 1300, on the cusp of the Early English – Decorated divide. The squints either side of the chancel arch were inserted during a Victorian restoration. The north aisle added later in the 13th century. This is unusual, with a central transverse arch, presumably added for strength. The north wall lancets are original in style but renewed, whereas the windows in the south nave wall date from around 1500. The heavy, dark roof is also from around this period, with alternating hammer-beams and kingposts.

The church has some unusual and interesting fittings. Most celebrated is the late Saxon sculpture on the north wall, showing Christ in a loin cloth, piercing a rather diminutive beast with a cross-topped lance, with Urnes-style interlacing at his feet. This may depict Psalm 91, verse 13: You will tread upon the lion and the cobra; you will trample the great lion and the serpent.

The square font is 14th century in style, with corner pillars on the broad stem, and there is a 14th century piscina in the chancel. Various memorials are also of interest: in the south chancel, a large monument to Charles Rochester (d. 1758) has a bold portrait in a medallion, with his wife Leonora (d. 1756) standing just behind him. Opposite is a cartouche with pilasters and broken pediment to Robert Rochester (d.1723), two sons and a grandson.

On the south wall at the west end of the chancel are three brasses to the Markwick family; that to Elizabeth (d. 1608) was lost for over 90 years before being found in an antique shop. Opposite, a black marble tablet to a former Rector, Nathaniel Collier, depicts the date as 1691/2 – demonstrating the dispute over the start of the New Year (25th of March in the Julian calendar or 1st January in the Gregorian calendar) – not settled until 1752.

On leaving, go via the churchyard towards the village, through the fine, centrally hinged Tapsel Gate.