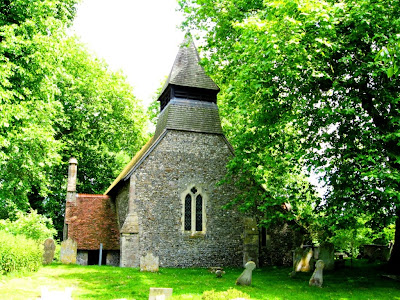 Apuldram is a delightful place with a delightful name, from the Old English apulder (apple) and hamm (enclosure), a testimony to the soil, ideal for apple cultivation. It has an equally delightful church, once a chapel of ease of Bosham.
Dating from around 1100, the church was substantially rebuilt in the 13th century, when a south aisle was added, and gained its porch in the 1400s. Among the five 19th century restorations, that of 1845 by J Butler, architect to Chichester cathedral, was particularly sensitive to the interior, and revealed the squint and rood-loft stairs (now fronted by the pulpit). Later work in 1877 by Lacy W Ridge was less sensitive, with a roof in pine and the little bell turret, although the whole has seasoned well with time.

The approach from the nearby lane is by a long footpath, with fields, meadows and trees, to a wooded churchyard, planted with roses. The exterior is classic Sussex: knapped flint walls, with Caen stone dressings, a red tiled roof, and shingled turret.

The porch leads into the south aisle, with three bays of classic Early English Gothic, double chamfered arches resting on round piers with round abaci and massive square bases. The nave and chancel are undivided, but eyes are drawn to the chancel. This is a simply beautiful 13th Century composition: triple lancet windows with moulded heads, Purbeck marble shafts and wall arcading fill the East wall, with matching compositions in the north and south walls. The result is surprisingly sophisticated for so small a church, described by Pevsner as ‘rich and austere at the same time’.

The church’s fittings are almost the equal of the architecture. Pride of place is fought for by the beautifully preserved 15th century wooden screen in the south aisle, of six bays of cinquefoiled ogee arches with quatrefoils in the spandrels; and the 14th century pavement of encaustic tiles on the lower chancel step, a rare survivor anywhere and even more remarkable in so small a church.

At the west end of the south aisle, a mediaeval bench survives, with poppyheads originally of fleur-de-lis design, behind the 12th century font, decorated with Romanesque arcading. Piscinas survive in chancel and south aisle. Finally, the porch windows have a scratch sun-dial and interesting graffiti on the jambs, including a merchant’s mark, a “weathervane cockerel”, scroll-work and lettering.

The whole experience is a delight: on my visit, on a perfect warm June day, I ate a picnic lunch in the shade of the churchyard trees, before taking the footpath the short distance down to the sea wall of the Fishbourne Channel.