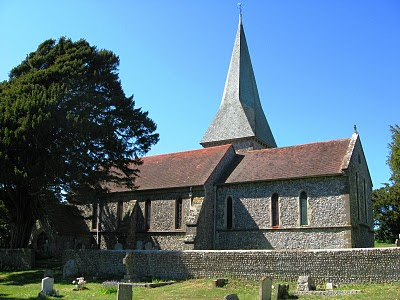 Patching village sits just above a gap in the South Downs, north west of Worthing, and above the glorious sweep of road known as ‘Longfurlong’, now part of the A280. The village has some picture-postcard thatched cottages, and a mediaeval church, dedicated to St John.

The village and church are first mentioned in the Saxon period in 948AD, and again in the Domesday survey, but the present building dates from around 1200. There is an unbroken list of Vicars from 1282 to the present day.

The sequence of building in the church presents something of a mystery, as the fine arches beneath the tower (and the odd orientation of the nave) suggest that this may have been intended as the original crossing. The church was renovated in 1835, 1856 and especially in 1889, when the spire, porch and vestry were added, as well as its rededication to St John the Divine.

From the outside, the church is typical Sussex: flint walls, stone dressings and a tall, shingled spire, and Early English Gothic lancet windows throughout. Inside, the nave is wide and barn-like, with a magnificent, original roof. But what catches the eye is that the chancel arch of off-centre, with the nave apparently pushed to the left.

Just before the chancel arch to the left is an archway to what is now the north transept, but is actually beneath the tower, and there are also arches to the east and west, all with shafts in classic 13th century style.

The chancel is entered through an impressive Victorian screen, and has two lancets in the East End with a small Oriel window above, and a fine piscina with stiff-leaf capitals. The carved reredos is a modern addition.

Furnishings include a very fine octagonal 15th century font, with quatrefoil panels enclosing rosettes, and a 19th century pulpit incorporating 16th century arabesque panels. On the floor beneath the tower is a fine 18th century memorial, to Mary (d. 1737) and Robert Bushby (1739). Their epitaphs read:

The modern parish includes the nearby church of Clapham and the larger church of Findon, up the Longfurlong road. The church is a Grade I listed building.