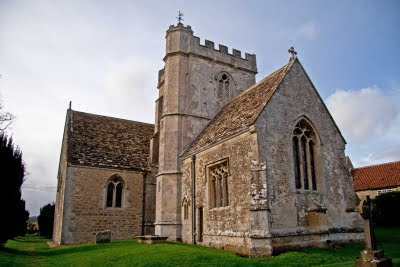 
Lullington's village green has a small scattering of houses, a former school, a farm and a church. So perfect is this little ensemble, it could almost be a film-set.

The church is ancient however: possibly a Saxon foundation, it was in the ownership of the Bishop of Coutances in 1086. The building we see today dates from the 12th century, with a South Aisle added around 1280, the Chancel in 1340, and South Porch around 1450. Extensively but sensitively restored in 1862, it is chiefly known for its Norman work, regarded as among the best in Somerset.

On the exterior, this is most clearly visible on the north side, where the north door has a fine Tympanum with Christ in Majesty, above an arch of two orders, one zig-zag and the other a series of wonderful beak-heads. Beneath, two animals eat from the Tree of Life. The supporting columns have zig-zag and spiral carving with heavily weathered capitals. Above, the corbel table is a delight in its own right, with the subjects including a surprised-looking king and two beasts embracing. The south doorway is also Norman, although of a simpler design.

Inside, there is yet more Norman work in the tower and chancel arches, with carved capitals depicting a green man, a winged lion and a peculiar ox with two bodies apparently joined by a single head. But the best furnishing is its font: dating from the 11th century, it has interlinked arches under a frieze of flowers and an inscription which reads: "Hoc Fontis Sacro Peveunt Delicta Lavacro". Above the inscription is another frieze, this time of 'Green Cats', linked with long bands of foliage spewing from their mouths. Such green cats were probably meant to be lions, but were carved by masons who had never seen the real thing. Whatever their origins, it makes the font a unique and fascinating object.

Well worth a detour. 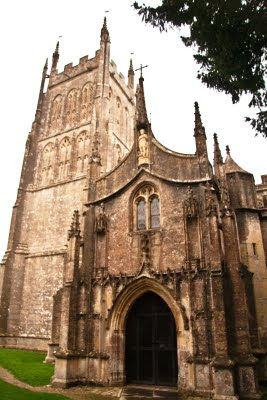 Mells is a pretty and interesting little village just west of Frome, with houses scattered along steep lanes. At its heart is the impressive church of St Andrew, set alongside an equally impressive Tudor Manor House, approached along a planned 15th century street - the combination being described by architectural historian Nikolas Pevsner as "among the happiest in Somerset".

The church itself - now Grade I listed - was founded in the 13th century, but almost entirely rebuilt in the 15th and 16th centuries in the Perpendicular Gothic style. From this period, the most notable features are the wonderful porch and tower - the latter with impressive pinnacles. Indeed, the whole church is decorated with battlements and pinnacles, as well as an unusual two-storied polygonal vestry. Both porch and tower have elaborate fan vaults, of a quality which would grace any cathedral.

Inside, the roofs and furnishings are largely Victorian, but it still feels like a mediaeval church: the north chapel has its original wooden roof, and the south chapel - largely filled with the 19th century organ - has two very impressive brasses to earlier Vicars, unfortunately rather hard to appreciate in their cramped surroundings. Look closely and you can also find the remains of the odd Jacobean pew.

The adjacent manor house was once home to the Horner family, and passed by marriage to the Asquiths. Around the turn of the century, the house became something of a magnet for the artistic worthies of the time such as Eric Gill, Edwin Lutyens and Burne-Jones, who left some impressive fittings and furnishings, including tombs, memorials, glass and tapestries.

Most notable are a tapestry and a plaster memorial depicting a peacock to Laura Lyttleton, both by Burne-Jones; and the handsome equestrian statue by Mannings and Lutyens in the north aisle. This is a memorial to Edward Horner, the last of the male Horner line, killed in action at Noyelles in France in 1917, aged 28.

Outside, behind the East end of the church are memorials to the Horners and Asquiths, to Lady Violet Bonham-Carter, and - most notably - to Siegfried Sassoon, who asked to be buried close to his friend, Ronald Knox, the Catholic priest and scholar. To the north, a clipped avenue of yews is another example of Lutyens' work.