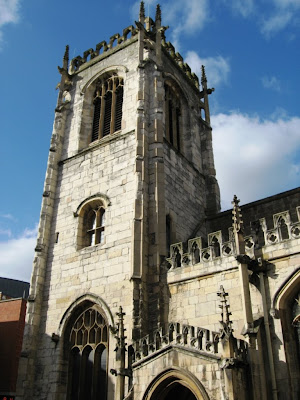 The church was one of one of York's largest and finest, prior to a fateful night in 1942, when an air raid reduced the church to a smouldering ruin. Before then, it boasted a large nave and chancel with full length aisles and chapels. The fabric dated from the 11th to the 15th centuries.

The well-known and large double-sided clock on Coney Street was fitted in 1668, and which was topped by a statue of the 'Little Admiral' in the 18th century.

The clock and statue survived the bombing, but little else did. The church was eventually rebuilt between 1961 and 1968, with the 15th century tower and south aisle becoming the church, and the remainder (most of the former nave and north aisle) becoming an enclosed garden of remembrance. Substantial parts of the north walls survive, however, including elements from the 11th century.

Although much smaller, the restored church is an attractive space, combining modern works with a 17th century memorial to Sir William Sheffield (d. 1633) and - above all - its mediaeval stained glass. This had fortunately been removed for safe keeping in 1940, and includes one gem: the window depicting the life and works of St Martin of Tours, dating from around 1440.

Formerly the west window, this is now in the new north wall and faces visitors as they enter. It is huge for a parish church (and is the largest in the city outside the Minster): 9m high and 4m wide, it is one of the best preserved of its type and contains no Victorian additions or repairs.

The church is normally open during weekdays for private prayer and visitors.