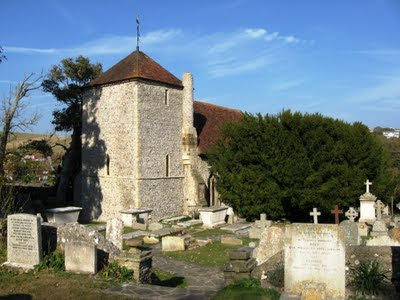 The charming village of Ovingdean, tucked away in its own little valley a mile inland from the sea, is now part of Brighton but remains a world away in spirit. It is also famous as the birthplace of Charles Eamer Kempe, the renowned designer of stained glass: his work fills the church and he is buried in its churchyard.

There was a ‘little church’ and settlement here in Saxon times, recorded in the Domesday book, and it seems that it was rebuilt almost immediately after the Conquest, when the current Nave and Chancel were erected. This was followed by the short, robust tower early in the 13th century, followed by the south porch around 1300 (rebuilt around 1867). The south wall shows the unmistakeable signs of a south aisle of two bays also built around the 13th century, and which may have been destroyed during a French raid. A south chapel was added leading off the chancel in 1907 on the foundations of an earlier structure.

The dedication to the 7th century French Bishop St Wulfran is unusual, shared only by the Parish Church of Grantham and the collegiate church in Abbeville, in France, where he is buried.

The church is set into a steep hillside, and the floor progressively descends from the tower to the chancel. Save for the corner stones, its walls are entirely of flint, with a red tiled roof and a typical Sussex pyramidal cap on the tower. The walls are pierced only by narrow Norman windows or simple lancets, save for the Decorated Gothic windows in the south wall of the nave. These, as well as others through the church, contain glass by Kempe, with his tell-tale wheat sheaf signature.

Inside, the interior is something of a surprise: the walls of the nave are bright with whitewash, and the eye is immediately drawn to the unusual arrangement of three chancel arches, underneath a rood screen. The plain central arch is the Norman original, with the two flanking arches added in the 17th century and rebuilt in the 19th; the rood is Kempe’s work from 1867. Opposite the south door are the remains of the original Norman north door, complete with water stoup. To the west, a generous pointed tower arch leads to a spacious tower room, which now contains additional pews and the font. High the east wall above the arch is the original mediaeval bell wheel.

Turning east, the Chancel has yet more lancets and Norman round-headed windows; the tiles reredos and painted wooden panels either side of the East Window are late Victorian, while those in the gable above by Maude Bishop were painted 1957-63. Of greater interest to most visitors, however, is the painted ceiling: although the ceiling is a 19th century replacement, the paintings of birds and foliage was done was Kempe in 1867. Off the Chancel is the small south east chapel, built in 1907 on the foundations of an earlier chapel.

Back outside, the old churchyard is worth a look; as well as the Kempe family tomb, is that of Magnus Volk (1851-1937), builder of the electric railway which still plies its trade along Brighton’s seafront.