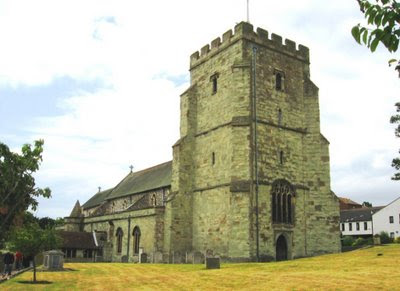 The Eastbourne familiar to most visitors is that of the genteel, largely Victorian, seaside resort. But it will surprise many that the town's history goes back a lot further: the area has been settled since the Roman period, and the Domesday Book records a church, watermill, salt pans, fisheries and ploughlands.

This settlement was a mile or so inland, and is today known as the 'old town’. At its centre is the surprisingly large church of St Mary, which dates from the 12th-14th centuries: it was fortunate in being sensitively restored in the 19th century, and is full of fascinating architectural and historical details.

The nave arcades have alternating round and octagonal piers, with stiff-leaf carving. The chancel arch and chancel arcades have a type of zig-zag decoration, whereas those in the nave are plain. The clerestory has large, simple lancets. The 14th century gave the tall tower arch and the decorated style windows in the aisles, tower and chancel. Two windows at the east of the south aisle are slightly later, from the 15th century.

The interior has a wealth of interesting details, fittings and furnishings. The chancel has decorated sedilia, piscina and Easter sepulchre, all with decorated ogee arches from the 14th century, and the south chapel has a tomb recess from the same period.

There is a rare rood piscina high on the south arcade next to the chancel arch, and there are two delightful faces in the south aisles - the one under the rood stair has a wonderfully bulbous nose. Both north and south chapels have 14th wooden screens with delicate ogee decoration. The font is slightly later, in the Perpendicular style. 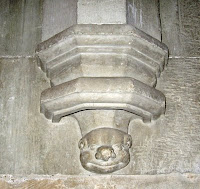 The church has a superb collection of memorials on the walls and floors, dating from the early 17th to the mid 19th centuries. Most notable are those of Katherine Gildredge and her two infant children (d. 1625), carved by Edward Marshall, master mason to Charles II, and located in the north chapel. More poignant is that to Henry Lushington in the South aisle, (d. 1763). He was the eldest son of the vicar and a member of the East India Company. He survived the 1756 'Black Hole of Calcutta' uprising, but died in another incident in 1763, defending his colleagues in Patna.

Outside, the “Old Parsonage” - actually a Rectory Manor house - survives from the 16th century, alongside a timber-framed barn. More oddly, the churchyard contains a tall Norman cross, brought from St Erth in Cornwall.