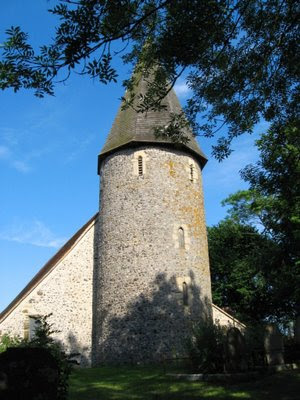 Piddinghoe is a fortunate place. Although just a mile or two from Newhaven and half an hour from Brighton, this delightful little village nestling under the South Downs has more than its fair share of picture-postcard cottages, a quay on the River Ouse with colourful boats tied alongside, and a lake in the former clay workings now used for watersports.

It also has a fascinating and atmospheric little church, set on a mound directly above the river, notable for having one of three round towers in the Ouse valley (the others being at Southease and St Michael, Lewes). Their origin reflects the plentiful supply of flints for building walls, but a shortage of other stone from which to carve out quoins for tower corners. Otherwise, from the outside, all is typical Sussex: walls of more flint, and a tiled roof which sweeps down almost to the ground. Inside, it is - even for an old church - extraordinarily dark and atmospheric.

Historically, it was built some time in the late 11th or early 12th century, as it is included in a list of churches given to the Priory of St Pancras at Lewes in 1121. It then probably consisted of just a simple nave and the tower. Expansion began early in the 12th century, when three round arches were cut into the north wall to form an aisle. Four arches were similarly inserted in the south wall to create a south aisle, but these are pointed and slightly chamfered in the Gothic style, and date to around 1200.

The Chancel was added later still, and is in the Early English style of the 13th century, with an attractive composition on the East wall of three lancets, with a round oculus window above, and a handsome (though restored) chancel arch. North and south aisles were added to the Chancel, at the same time, each with a two-bay arcade. However, at some later point the south and chancel aisles were demolished, and it was not until the restoration in 1882 that they were rebuilt, following the original floor plan, albeit with tiny quatrefoil windows in the south arcade clerestory. 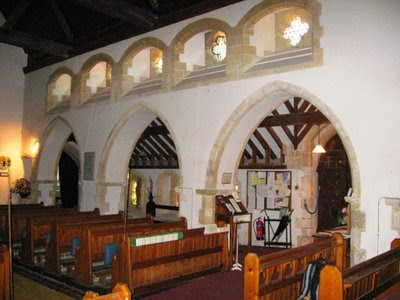 The church is dark owing to the small Victorian aisle windows, heavy with stained glass by Wailes & Strang. The one exception is an attractive modern window at the west end of the north aisle, by Marguerite Douglas-Thompson, inserted in 1983. The vaguely pre-Raphaelite Chancel glass is by Powell & Sons. The only other furnishing of note is the font, dating from the 13th century. The tower has three bells, cast in the 13th or 14th century, and all recast in 1713.

Back outside, there are two points of interest: next to the tower are the village’s stocks, still in place and now listed as historic monuments in their own right. Finally, the tower’s weather vane is shaped like a large fish, although its age is not known (other than being present in the 19th century). It features in Rudyard Kipling’s poem 'Sussex’, thus: ...where windy Piddinghoe’s begilded dolphin veers… Kipling clearly used some poetic licence, as the fish resembles a salmon rather than a dolphin!