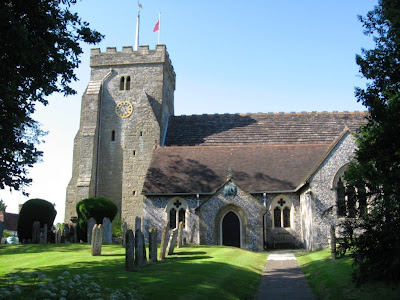 Henfield is one of those Sussex villages people drive through and admire, but seldom stop to explore. That’s a pity, because - traffic aside - it’s a very attractive place, with an impressive church tucked away from the main street on a narrow lane.

History records King Osmond giving permission to the local Count Warbold for a church as far back as 770AD, but the oldest parts of the present church date from around 1250. Rebuilding in the late 13th or early 14th centuries provided the present nave and clerestory, and the 15th century left the tower and Lady Chapel. Restoration in 1871 delivered the present wide aisles and two-bay outer aisles as transepts, as well as a new chancel.

From the outside, the impression is of an entirely Victorian church, save for the tower: Pevsner’s Buildings of England describes this as: “A Perp tower like a keep, as grim as it would be in Northumberland”, though it reminds me of the tower of the church in which I was christened, at Burnham-on-Sea in Somerset. But inside, the retention of the 13th century chancel arch and handsome 14th century arcade and nave roof, as well as the Lady Chapel, give it a more historic appearance, although it's hard not to be distracted by those those wide Victorian aisles. 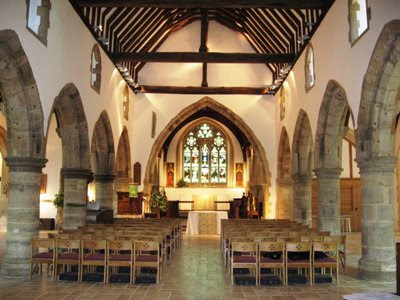 Fittings are mostly Victorian, too, although the screen to the chapel – now known as the Parham Chapel - is 15th century, and there are old church chests – one Jacobean – dotted around. The piscina is also 14th century and was moved to the chancel in the Victorian restoration. Two 13th century lancet windows were also retained, now in the clergy vestry. The chapel windows are original, although the glass in modern (several of the windows are by Kempe). The most striking modern addition is the new stone floor, which still looks very new and one hopes will mellow a little with age.

Before you leave, the churchyard is worth exploring: there are some fine 18th century gravestones, and several avenues of clipped yews – 104 in all!