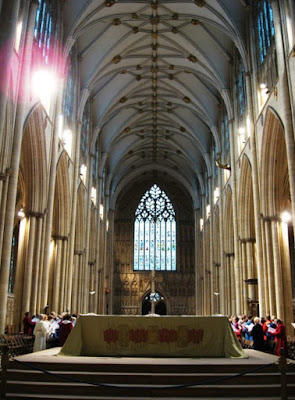 York Minster styles itself as the 'largest mediaeval gothic cathedral in Northern Europe’, although Cologne also claims the title. Although, personally, I don’t think it’s a particularly atmospheric church for its age - there’s not a lot of interest at ground level in the nave and crossing - it is a huge and impressive architecturally. The most interesting parts are the nearly 2,000 years history preserved and on display in its crypts, and its enormous collection of original mediaeval stained glass - unrivalled in Britain, and of world importance.

In other words - look up and look down!

York has a very long Christian history indeed. A diocese was established and based in the Roman city of Eboracum in 314AD, although the first church on the site was built in wood for King Edwin of Northumbria in 627AD. This was rebuilt in stone and dedicated to St Peter in 637AD by King Oswald. Although the history is obscure during the Viking period, when the city was renamed Jarvik, it was rebuilt several times again before the Norman conquest in 1066. The Danes destroyed it in a raid in 1075, and a fully Romanesque church was built by the Normans in 1080, completed in 1154.

The ascendency of York as an Archbishopric led to the Cathedral being rebuilt from the 13th Century onwards on a vast scale and in the new Gothic style, in a complex sequence that has left substantial elements from all three main periods of mediaeval Gothic architecture: Early English of 1220 in the transepts, from around 1220; Decorated Gothic in the Nave and Chapter House from 1280-1350; and Perpendicular in the Chancel from 1361-1472.

The tower collapsed in 1407, and a new one was completed in 1420, and the western towers added between 1433 and 1472. The church is therefore unusual in being almost entirely mediaeval in its structure, with the restorations of the Victorians and later being relatively restrained - largely repairs from fire damage, including the most recent fire in 1984 which destroyed the roof of the south transept.

The church suffered badly in the Reformation, especially in destruction of its tombs, although the glass survived remarkably intact. Work to underpin the cathedral in the 1970s led to the discovery of substantial Roman, Viking and early mediaeval remains under the cathedral’s crypt, and much of this is now visible as a separate tour.

The best place to start is the Nave, although the entrance is normally through the South Transept. One of the widest mediaeval naves in Europe, it is a perfect exampel of the elaborate Decorated Gothic style. The west window is one of the most impressive anywhere: it is known as the 'Heart of Workshire’ because of its heart-shaped tracery and dates from 1338. At ground level, the nave is relatively plain, but the glory of York is the stained glass, mostly mediaeval. This is best observed on a sunny day, as much of it is very dark (and large areas are in need of further restoration). Notable on the south wall of the nave is the Jesse Window from 1310.

The Transepts are perfect examples of the early English Gothic style, particularly the window in the north transept, whose five enormous lancets are known as the Five Sisters’ Window. The delicate grey-green glass, known as grisaille dates from 1260 and is the oldest glass in the cathedral. Opposite, the great rose window in the south transept dates from 1500, and celebrates the union of the houses of York and Lancaster at the end of the Wars of the Roses. The elaborate tomb of Archbishop Walter de Grey, who began the rebuilding in 1220, is in St Michael’s chapel in the South Transept, and is the best preserved mediaeval tomb in the cathedral.

The crossing (1420) contains wonderful tracery in the vault. The elaborate screen separating the crossing from the Choir dates from the 15th century, and depicts fifteen kings of England from William I to Henry VI. The tower can be climbed from an entrance in the south transept, for excellent views over York.

Finally, the Chancel, containing the Choir and Sanctuary are in the grand Perpendicular Gothic style, and include two more half-size transepts (actually, better appreciated from the outside). The interior of the choir and its wooden stalls are, alas 19th Century replacements after a fire 1829. But all eyes are drawn to the huge East Window, completed in 1408, and the largest single expanse of mediaeval glass in the world - famuosly, the size of a tennis court. It depicts scenes from the beginning and end of the world, from the books of Genesis and Revelations.

At ground level, the chancel aisles contain most of the tombs in the cathedral. The only Royal tomb is at the entrance to the north aisle, and belongs to Prince William of Hatfield, son of Edward III. Unusually, although he died as an infant, he is depicted as a young boy in full armour. Half way along the north aisle is the St William Window of 1422, one of the best examples of 15th century glass painting in the Cathedral, depicting St William - a 12th century Archibishop of York. Further around the aisles are a wide range of memorials, mostly from the Tudor and early Stuart periods.

This is a separate tour and is accessed from the corner of the South transept by the main entrance. As well as the Treasury, it includes views (in-situ) of the archaeology unearthed in the 1970s, including remains of a Roman fortress, Viking, Norman and early mediaeval remains and carvings, probably from the earlier Minsters. It also contains a small chapel, the resting place of St William of York.