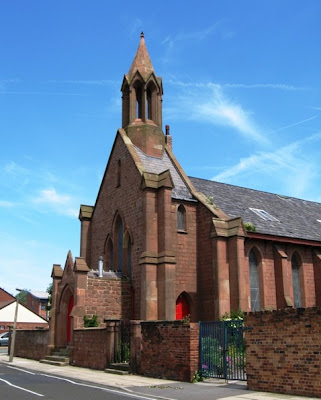 St Clement's church in Toxteth is a small but well preserved example of a 19th century revival church, built in the style of a 'preaching box'. It is a grade II* listed building.
The foundation stone was laid on 7th May 1840 and the church was consecrated a year later. Built in the lovely local red sandstone, the exterior is in a handsome but restrained Early English Gothic style, with a small conical bell turret at the west end.

However, the exterior doesn't really prepare you for the inside as, although there is plenty of Gothic detailing (especially in the roof trusses), the overwhelming impression is that of a nonconformist chapel rather than a church: the nave is filled with box pews, still with their original numbers; there is only the merest hint of a sanctuary, and the east end is dominated instead by a double-decker pulpit.

The walls have generous galleries, supported by elegant cast iron columns which rise up to the roof trusses, giving the impression of a hammer beam roof, although the weight is borne on the columns. The resulting effect is one of a surprisingly large and bright space for such a small building. The east end windows are filled with simple but bright stained glass.

The area immediately around the church includes some sadly derelict land, and the church is need of some interior restoration, but is nevertheless well worth a look. Services are in a low but inclusive evangelical style, with a small but loyal and welcoming congregation.