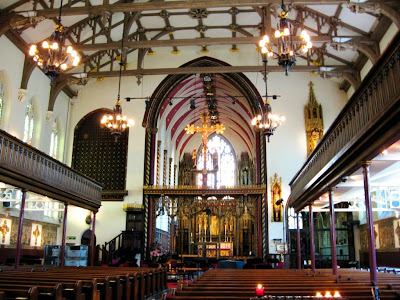 Perhaps that is to the benefit of those who do know about it: a church that is open on most days, its neo-Gothic splendour - and splendour is the right word here - providing an oasis of calm and tranquility in the midst of rushing madness.

The need for church here was becoming clearly evident in the early 19th century, as the development of the Belgravia and Knightsbridge areas started in earnest. The church was built mostly by private subscription: Thomas Cundy the younger was appointed architect, and the work was undertaken 1840-1843.

The church was perhaps the first in London to champion the principles of the Oxford Movement, which emphasised a return to the rituals and traditions of the Catholic church, and debates and controversy arising from this dominated the first 50 years of its life. The Chancel was lengthened in 1871-2 and again in 1892 by the well-known church architect G F Bodley, with the addition of a side chapel by the equally well-known A Blomfield in 1889.

The church itself is built in the Perpendicular Gothic style, of yellow brick with Bath stone dressings. It has a prominent (though to me, slightly incongruous) western clock tower.

The exterior is handsome enough, but rather plain. It does not prepare you at all for the interior: the first impression is one of a vast space - the nave is both wide and high - and of the unusual retention of large galleries, supported on cast-iron columns on the north, south and west sides. The Chancel is separated by a full and elaborate rood screen - the work of Bodley, as is the design of much of the rest of the lavish decorative scheme, including the East Window.

The theme of elaborate decoration continues unabated throughout the church: the walls have tiled panels depicting scenes from the life of Christ (by Daniel Bell) interspersed with painted stations of the Cross (by Gerald Moira), and statuary and paintings abound. My favourite is actually the ceiling, a wonderful structure supported by impressive wooden ceiling trusses. Unsurprisingly, it is a Grade-II* Listed Building.

The church is today centre of a very busy parish life. In its past, it has been associated with the great and the good, although these days it emphasises its inclusiveness. It has a rich tradition of music, and is also a venue for regular concerts.