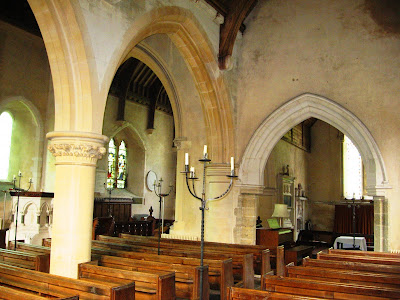 St Mary is a classic Manor church; it sits next to the impressive bulk of Wiston House, reached by driving across a huge park and some distance away from any modern settlement.

The church is mentioned in the Domesday book, but underwent significant restoration by G M Hills in 1862, which swept away much of the earlier fabric. (Pevsner refers to it as being 'terribly treated' in the Sussex Volume of his Buildings of England). But it is still an interesting church to visit, its faded wooden pews lending it an air of antiquity.

The church itself has a short nave, with a large two-bay south aisle, which leads in turn to a spacious Lady Chapel. The style is a mixture of Early English and Decorated Gothic, although much dates from 1862: the east and West windows are original, with 14th century reticulated tracery, and both contain fragments of colourful, original glass, the shields in the east window also dating from the 14th century. The carved Norman font also remains, albeit not on its original pedestal.

But most interesting are the monuments in the Lady Chapel, where pride of place goes to a magnificent brass of Sir John de Brewys (Braose in French), who died in 1426. Adjacent is a recumbent effigy of a child beneath a Perpendicular canopy, which may be that of his infant son, whose early death resulted in the manor passing to the Sherley family. Sir Richard Sherley (d. 1540) is shown on a wall memorial with his two wives, although a harsh restoration makes it look almost modern. On the window are the kneeling figures from the monument of Sir Thomas Shirley (d. 1612). At the other end of the chapel, a late 18th century monument to Sarah Goring (d. 1798) could not be more different: a peculiar mixture of a classical mourning figure under a Gothic canopy. On my visit this had been charmingly taken over for a series of prayer requests and candles.