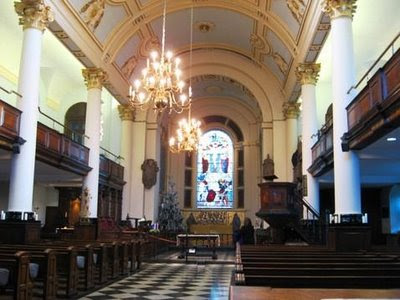 St Botolph without Bishopsgate is a familiar landmark to those using Liverpool Street Station, (it’s just two minutes’ walk away) and one of several churches dedicated to this East Anglian Saint in London.

The foundations of the original Saxon church were uncovered when the present building was erected, which was referred to in 1212 as ‘Sancti Botolfi Extra Bishopesgate’ - remarkably similar to the modern name. In 1247 the priory of St Mary of Bethlehem was founded just north of the church, the buildings of which became the Bethlehem Hospital for Lunatics after the reformation.

Although the church survived the Great Fire in 1666, it had become ruinous by the early 18th century and the present church was built in 1725-9 to the designs of James Gould (or Gold), under the supervision of his son-in-law, the well-known architect George Dance the Elder (1695-1768). It was altered by Michael Meredith in 1821 to include a dome over the centre of the nave, to provide more light, with restorations to repair damage resulting from World War II and the IRA bomb in 1993.

Famous parishioners included: the actor and contemporary of Shakespeare, Edward Alleyn (who also founded Dulwich College); the poet John Keats, who was baptised in the existing font; and Sir Paul Pindar (d. 1650), James I’s Ambassador to Turkey, the façade of whose Bishopsgate house is preserved in the Victoria and Albert Museum.

The building is Classical in style, of red brick with stone detailing, mostly on the quoins and around the windows. The handsome Baroque tower is, unusually, at the East End on Bishopsgate, and is easily its best external feature: it sits above a pediment with Doric pilasters, which frames the East window, and then rises in stages to a small cupola, topped off by an urn.

Inside, the nave consists of a barrel vault on tall Corinthian columns, with a short chancel, with galleries above both aisles. The centre of the vault is pierced mid-way by Meredith’s dome of 1821, which has a fully glazed drum, providing a welcome pool of light in its centre (it must have been very dingy before).

The decorative scheme in whites, pale blues, highlighted with subtle gilding, is restrained but pleasing on the eye, and doubtless benefits from the restoration after the IRA Bishopsgate bomb in 1993. There are relatively few monuments of special historical interest, except the font in which Keats was baptised in 1795, although some of the more modern furnishings are attractive. The church has an impressive peal of 8 bells, all dating from 1782.