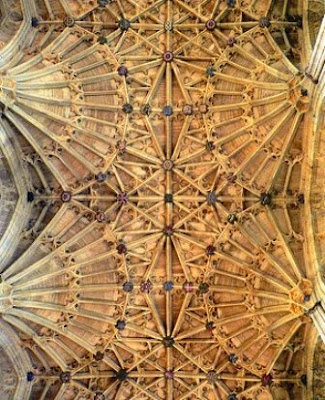 Sherborne is a wonderful little town, and well worth a day trip from London (or anywhere else, for that matter). It is famous for its schools, and having not one, but two, castles. But for me, the Abbey is the main event. It is one of the most impressive non-Cathedral churches in the UK and built on a cathedral-like scale, having been at various times both a Cathedral and an Abbey.

Sherborne has a long history, dating back to Saxon times. A See was created here in 705, when King Ine divided the See of Winchester and appointed his relative Aldhelm, the abbot of Malmesbury, as its first bishop. According to the Anglo-Saxon Chronicle, two Kings of Wessex are buried in the church: Ethelbald (d. 860) and Ethelbert (d. 866), two older brothers of Alfred the Great. The see was divided up in 909 when the dioceses of Wells, Crediton (forerunner of Exeter) and Ramsbury were created, although Sherborne was later merged with Ramsbury.

After the Conquest, the See of Sherborne was moved to Old Sarum (and later to Salisbury), and the church settled down to what should have been a quieter life as a Benedictine Abbey. But in the 15th century, the church was the scene of a great dispute between the townspeople and the monks of the Abbey.

As was common in those days, the townspeople worshipped in the Nave of the Abbey, with the Chancel reserved for the monks. From the 14th century, a separate church, dedicated to All Hallows, was built as an extension immediately to the west of the nave to house the growing population of the town.

Late in the 14th century, the monks began rebuilding the Abbey in the new Perpendicular Gothic style. By 1437, new Perpendicular vaults had been erected over the north transept and the choir, new windows inserted, and a new tower completed. But the chancel was only half rebuilt when a serious argument between the monks and the townspeople came to a head.

The argument started when the monks repositioned the font in the nave, at the same time narrowing a door into the nave from the church of All Hallows. The townspeople objected to the changes and wanted them reversed: when the monks refused, they reacted with perfect pique: they erected their own font in All Hallows, and rang the church bells at times calculated to cause the monks annoyance, during their Divine Offices.

The matter was adjudicated in 1437 by Bishop Neville of Salisbury, who essentially suggested restoring things to how they had been, as well as curtailing the bell-ringing. But this did not pacify the now enraged townspeople, who rioted and burned the church. (The scorch marks can still be seen in the crossing and choir walls).

The townspeople were made to pay for its rebuilding, and pay handsomely: it was rebuilt in the best Perpendicular style, with the nave vault finally completed towards the end of the 15th Century. However, the parishioners had the last laugh: At the Dissolution, the monks were expelled and the Abbey became their parish church, and over the years was adapted with the addition of galleries and box pews. There was also no longer any need for All Hallows, which was demolished and the materials sold off; its scant remains are visible at the west end of the present church.

By the mid 19th century, Sherborne was in need of major restoration, which was carried out with unusual sensitivity by R C Carpenter and William Slater from 1850-58, with further work on the tower by R H Carpenter in 1884. Further restorations of the roof and glass were carried out in 1878-81.

Essentially, most of what can be seen today dates from the rebuilding of the 15th century, although beneath this, much of the Norman fabric and the original ground plan remain. The crossing is entirely Norman work, as is the porch, with a Lady Chapel surviving from the 13th century. A Saxon doorway survives at the west end in the north aisle, and the Norman doorway - complete with the controversial narrowing - at the west end of the south aisle.

But what grabs the attention is the rebuilt nave and choir, in the finest Perpendicular Gothic: and what really grab one's attention are the fan vaults. These are truly spectacular, and support the shallowest of arches (so much so that they have needed much subsequent reinforcing: the choir is the earliest surviving large-scale fan vault to have been built, and its design was rather over ambitious). The nave and choir vaults are about 50 years apart in date, but both are decorated with the most elaborate of ribs and bosses - each carved with a different theme.

It is also worth noting the irregularities of the nave: the nave piers of the arcade do not correspond to the clerestory windows above, suggesting that the original Norman arches were faced in the perpendicular style, but the rest of nave rebuilt from the clerestory upwards.

The church has furnishings worthy of a cathedral as well: there is notable stained glass by Pugin and the firm of Clayton & Bell, alongside some mediaeval fragments in St Katherine’s Chapel; several impressive tombs and memorials, most notably to Sir John Horsey (d. 1546) and his son (d. 1564), both in full armour; and the huge, confident classical monument to John Digby (d. 1698) and his two wives in the south transept.

The choir has some exceptional carved misericords, with themes such as a wife beating her husband and a master beating a boy. More modern is the beautiful Reredos in the Lady Chapel by Laurence Whistler.

But the joy of the Abbey also rests in its setting, with its grounds nestling in the heart of this attractive little town.