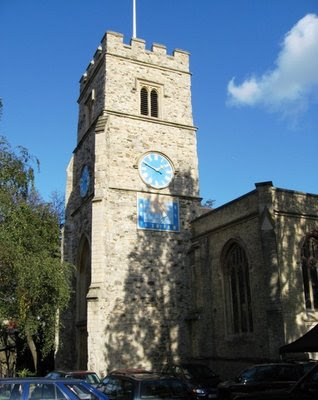 St Mary’s is the old parish church of Putney, and is a distinctive local landmark, located at the south end of Putney bridge.

The parish dates back to at least 1292, although there may have been a church here earlier. But the most important historical period was during the English Civil War, when the headquarters of Cromwell’s army was briefly located at Putney. In 1647, meetings of the Army Council were held in the Chancel of the church.

These discussions - known as the 'Putney Debates’ - covered subjects connected with the future government of the country. Although their contemporary impact was modest, some view them as foreshadowing modern Parliamentary democracy, and they may have influenced the American Declaration of Independence and the subsequent US Constitution.

The church today is a mixture of styles from over the centuries: the most distinctive external feature is the tower, which dates from the mid 15th century, as do some of the arcades in the nave. However, the church was substantially rebuilt in 1836, when the nave was widened, and new aisles built in yellow brick. The windows also date from this period, albeit in a Perpendicular Gothic style in keeping with the nave arcade.

An interesting feature is the Bishop West chapel, which dates from the 16th century. This was moved from the south side to the present north side in the 1836 rebuilding. Though whitewashed, it has attractive fan vaulting, with bosses of the Bishop’s Coat of Arms.

However, the present internal appearance of the church dates from 1973, when it was severely damaged by an arson attack. Rebuilding was not completed until 1982. As part of this work, the opportunity was taken to re-orientate the church through 90 degrees, so the altar is now on the former north wall, and the pews have been replaced by modern chairs. The resulting space now feels very contemporary, despite the essentially mediaeval and 19th century structure around it. On the south wall is a small room displaying the history of Putney Debates.

To the south of the church is the Brewer centre, a recent addition which includes community space and, on the ground floor, a modern cafe, which serves light meals and snacks. This also allows entry into the church when the main direct entrance is closed.

St Mary’s is part of the busy (and large) parish of Putney which also includes All Saints church on Putney Common. Worship at St Mary’s is inclusive, using a modern language Eucharist, with a quieter service in the evenings.