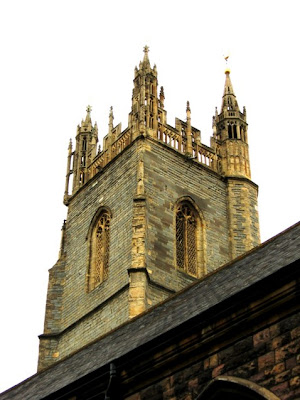 St John’s is the principal church in Cardiff City Centre, and in many ways its mother church, since its Cathedral is several miles out in the suburb of Llandaff. It is the oldest building in the city centre (apart from parts of the castle), and the only significant survivor from the pre-industrial mediaeval town.

The precise origins of the church are unclear, except that it is of Norman foundation, established as a chapel of ease to the parish church of St Mary’s, itself built shortly after the Norman Conquest. It is first mentioned in documents dated 1180. The chapel served the needs of the nearby castle, with which it has retained close links over the centuries.

The church was substantially rebuilt in the mid -15th Century, following severe damage done during Owain Glyndwr’s sack of the city in 1404. This included a new nave in the Perpendicular style, with a wooden barrel-vaulted roof, completed in 1443, and a handsome 130ft tower, in the ‘Somerset’ Perpendicular style, completed in 1473 and paid for by Lady Isabella Neville, daughter of Warwick ‘the Kingmaker’.

The church became the parish church in 1607 when St Mary’s was destroyed in a disastrous flood. It was also involved in the religious debates of the 17th century, when it briefly became a centre of non-Conformity during the Puritan revolution. As Cardiff grew during the 19th century, it became clear that it needed to be expanded, with the addition of new north and south aisles and an enlarged chancel, between 1886 and 1897.

The tower dominates the view along Church Street from St Mary’s Street to the west, where its handsome proportions and elaborate crown, with four corner lanterns, can be fully appreciated. It rises in three stages from the west door, with an attractive perpendicular Gothic window dominating the lower stage, and tall lancet bell openings with delicate tracery above. The crown, with its lanterns, is regarded as one of the best in the UK, with more pinnacles than any other save for that of Wrexham. It is a pity that the buildings of modern Cardiff don’t permit a better view. The tower is opened for visitors on selected days through the year - see website for details.

After this magnificence, the interior is, on first sight, rather plain: the 15th century arcades are spacious and lofty, in typical Perpendicular style, but the lack of a clerestory makes it a little gloomy. The 19th century arcades add volume, but little of interest, and the eye is drawn instead to the spacious Chancel, separated by an impressive Victorian wooden screen. There are chapels to the north and south, and a rather plain modern extension at the south-west end of the south aisle, added in 1975 to provide a vestry.

Most of the interest lies in its furnishings, the best of which are found in the north Lady Chapel, also known as the Herbert Chapel. This is screened on two sides by elegant late Perpendicular wooden screens, of late 15th or early 16th century date, and in-filled with later panels from the reigns of Queen Mary and Charles I. These contain medallions with grotesque figures.

Dominating the north wall of the Chapel is the church’s finest monument, to the brothers Sir William Herbert (c.1548-1609), keeper of Cardiff Castle, and Sir John Herbert (c.1550-1617), Secretary to both Elizabeth I and James I. Unusually, the two men lie side by side, Sir William in his armour and Sir John in a long lawyer’s gown. Their ages on the tomb are somewhat inflated: Sir John’s age is given as 84, and that of Sir William as 76.

On the south side, is a Chapel dedicated to the Order of St John. The chapel is fronted by a fine carved Jacobean bench, acting as a communion rail, and has an impressive reredos by Comper, a memorial to Lord Kitchener. At the west end, the first floor interior of the tower is worth a look for its impressive collection of 17th-19th century memorial plaques.

The Chancel is notable for the two arches on the south side which, dating from 1213-1239, are the oldest identifiable part of the present church. The Great East window contains fine glass by Comper, depicting the risen Christ, flanked by the Virgin and Saints. The principal other feature is the reredos (1892), designed by the architect John Pritchard, which contains an unusual central panel of carved and gilded figures by Sir William Goscombe John. These represent Old and New Testament figures, chosen to reflect the growth of the sacramental tradition.

The church really is at the centre of the City, but seems overlooked by the majority of people rushing past. Instead, it offers a haven of peace and tranquillity and, during services, some excellent church music. Its tea-shop (Weds-Sat) also offers more earthly refreshment for shoppers in the form of tea, coffee, sandwiches and home-made cakes.