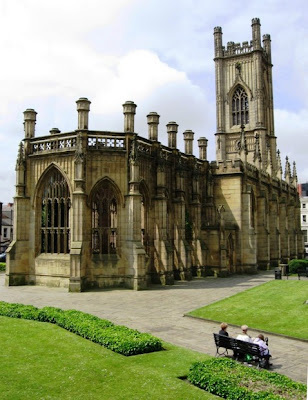 St Luke's is a prominent landmark in central Liverpool, situated at the entrance to Liverpool's Chinatown, it's Gothic architecture looking somewhat incongruous next to the Chinese gateway close by. The strong perpendicular lines are softened by a small garden and trees and bushes around the site, not to say an impressive wall with Gothic detailing.
The church was designed by John Foster, and although work commenced in 1802, it was not consecrated until 1831, the final work having been carried out by his son. The style is a florid but striking Perpendicular Gothic, with elaborate pinnacles on the nave buttresses, and octagonal pinnacles rising above the chancel. Both church and the surrounding walls are Grade II* listed buildings.

But it's not until you get up close that you realise that the church is just a shell, a victim of a fire-bomb in an air-raid on 5th May 1941. Never fully repaired, the walls are intact, but roofless and windowless. The site is still consecrated as a church, and the venue for various arts events, but in the main it stands as a sort of unofficial war memorial to the estimated 2,500 who lost their lives in the 1941 Liverpool Blitz.