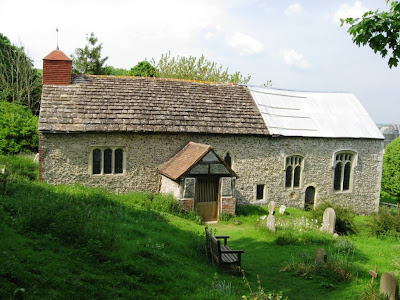 Even by the standards of isolated and rural Sussex churches, Coombes church stands out. It has long since lost its dedication, and there isn't even a road to it: the nearest you can get is to the farmyard of the adjacent Coombes Farm, from where you walk along a public footpath though a field, and over a narrow style to the churchyard, nestled in the hillside. The grassy path continues right up to the porch. The location is amongst the most beautiful I know.
Coombes now serves just 16 households, but once this village must have been large and prosperous enough to build its little church. Its origins are obscure: all we know is that it was mentioned in the Domesday book in 1087, and its nave walls date from the 11th century. The chancel was rebuilt some time the 13th or 14th century and its windows in the 15th and 16th centuries. In the 18th century, the western tower disappeared - possibly collapsed - and the present bell-cote was erected. The bell within is ancient, dating to 1170, and believed to have been made in Normandy.

From the outside, its outline is long and low, with a roof of heavy Horsham slates, and the west end buried in the hillside. The 16th century porch leads to a wonderfully ancient door - surely of the same age - with a wooden grill and heavy wooden bolt.

Inside are some vivid and ancient wall paintings, dating from around 1100 up to 1753. Although a little fragmented, these include a Nativity Cycle, the Lion of St Mark, Christ giving the keys to Peter, the journey into Egypt with the donkey led by St Joseph, and a wonderful figure, stooped beneath the Chancel arch, his face reflecting the eternal agony of bearing its weight. The 12th century painters certainly had a wicked sense of humour. On the opposite chancel arch are various ancient scratch carvings, including a Maltese Cross - possibly carved by a crusader?

I would strongly recommend a visit if you are in the area - you will not be disappointed. The church (and that of Botolphs, also worth a visit) is off the minor road from Steyning to Lancing College.
Near Lancing, West Sussex BN15 0RS Ordnance survey map reference: TQ 191082.
Posted by David J at 12:00