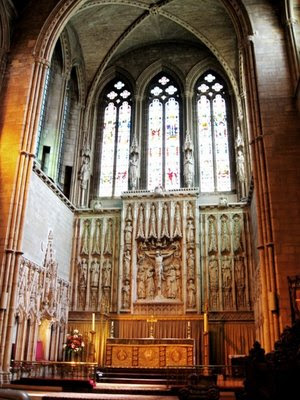 The church’s website describes All Saints as ‘one of the finest churches of the nineteenth century Gothic Revival’. Possessed of an extraordinary interior, it was much admired by the eminent architectural historians Pesvner and Sir John Summerson, and is well worth seeking out.

The church was the vision of Thomas Peacey, the first Vicar of Hove when it was made a parish in its own right in 1879. He rebuilt the old church (St Andrew’s) and erected another (St Barnabas), before turning his attention to providing a new and spacious Parish church.

The architect chosen was John Loughborough Pearson, viewed by many as the greatest architect of the Victorian Gothic revival. Amonst other things, he was responsible for the new cathedrals of Truro and Brisbane, as well as many churches in London. All Saints was to become the largest and costliest of his parish churches. Work began in 1889 and was largely completed by 1901, although the base of the tower was not finished until 1922 (and the remainder of the tower has, unfortunately, never been completed).

Pearson chose a French Early Decorated Gothic style for the new church, which is built of Sussex sandstone, and roofed with Sussex oak. The outside is attractive enough, although the tower base looks forlorn with its humble pyramidal cap.

But the interior is breathtaking. For a start, the scale and proportions are those of a cathedral: the nave is 40ft wide, and flanked by generous aisles. And the walls are entirely faced with ashlar - clear evidence of no expense having been spared.

The plan is conventional, with an aisled nave, short transepts, south chapel and chancel. The nave is particularly impressive: five bays of clustered piers rise through large clerestoreys towards transverse roof arches. These provide a repetitive pattern against the dark wooden roof, emphasising the height and leading the eye towards the chancel. The south chapel and sanctuary have stone vaults. The windows are equally impressive, and the church carries an almost complete scheme of stained glass by the famous company of Clayton and Bell. The north transept has three twin-light windows with a rose window above, whereas the south transept has a magnificent five-light window.

The furnishings are equally impressive and lavish: pride of place goes to a stunning high-Victorian stone reredos, of Pearson’s design and carved by Nathanial Hitch. There is elaborate wooden carving everywhere, most notably the screens of the South Chapel, the choir stalls and the amazing organ case, the latter designed by Pearson’s son, Frank Pearson. The marble font is a later addition, dating from 1928, and carries a large ornate wooden cover. Although the pews have been removed, the replacement chairs are reasonably sympathetic, and the interior is very well maintained.

The church takes advantage of the splendid setting to stage a wonderful Sung Eucharist, every Sunday at 10h. During the summer, they also host classical music concerts every Thursday, May to September (free to enter but donations requested), and lay on tea, coffee and biscuits. The church also has an active programme of children’s groups, as well as other outreach and support groups. Details of other services and events can be found on the website.