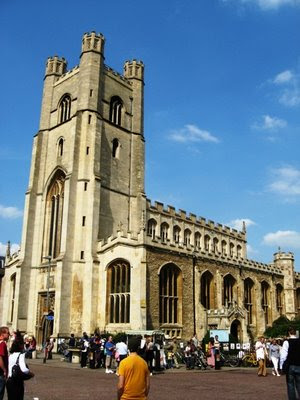 Known as the University Church, Great St Mary's dominates Cambridge's ancient market place. There was a church here in mediaeval times, but the present building dates from a thorough reconstruction, financed by Royal donations, between 1478 and 1536, although the tower was not finally completed until 1608.
The interior has a nave with a tall, Perpendicular clerestory, and its original wooden roof, donated by Henry VII. This has large and elaborate ceiling bosses, although they are hard to discern from the ground. (Gilding might work wonders...). Beyond that, there is little of particular interest, except perhaps for the curious gilded reredos, depicting Christ in Majesty, by Alan Durst.

The best reason for a visit is its 35m high tower, which is open to the public and can be climbed for a small fee (£2.50). It gives a superb view of the centre of Cambridge and its central colleges.