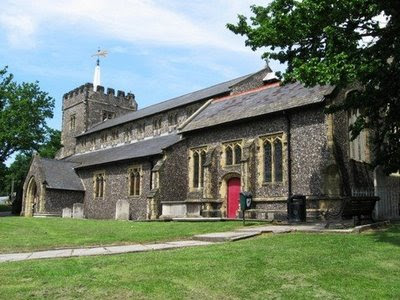 Brighton's ancient parish church is easily overlooked on a visit to the town. The church sits in a lovely churchyard, with lawns, mature trees and brick pavements, just yards from the busy modern shopping area of Churchill Square, and yet feels as if it would be equally at home in a Sussex village.
Superseded as the parish church by St Peter's in the 19th century, it still claims itself as the 'Mother Church' of Brighton, and indeed St Nicholas was the patron Saint of fishermen, doubtless a natural choice for the original little fishing village of Brighthelmstone.

Its history dates back to Saxon times: the Domesday book (1085) states that there was a church here in the time of King Edward (the Confessor, presumably), although nothing survives from this foundation. It is clear that it was rebuilt in the Norman period, and there is a small amount of Norman work in the tower. Otherwise, the church is substantially a late 14th century creation, from around 1380: the nave (five bays on octagonal piers), chancel and tower arches date from this time, and the outside of the tower is probably original too. The church was heavily restored around 1853, and a clerestory added in 1892.

The church is notable, however, for its furnishings. Pride of place must go to its font: the great architectural historian Pevsner regarded it as the 'best piece of Norman carving in Sussex'. The font is drum shaped, and probably dates from around 1170. The surface is completely carved, with scenes representing the Last Supper; St Nicholas and the ship; the Baptism of Christ; and another presumed story of St Nicholas. The base has a decorative frieze below the scenes, featuring scallops, scrolls and half rosettes. It is a stunning survivor.

Other fittings are mostly Victorian. Close to the font is the Duke of Wellington memorial (1853): the young Wellington attended church here, and the huge octagonal sculpture, in the shape of a font cover but inspired by the Eleanor crosses, is elaborately carved in best Decorated Gothic style. There are walls painting on the east and west nave walls by Kempe, as well as some attractive stained glass, also by Kempe. An iron plaque commemorates another regular worshipper, Samuel Johnson, and a medallion celebrates another, the actress Dame Flora Robson.

Outside, two headstones are worth a look: the first, commemorates Phoebe Hessel, who dressed as a man and served - and fought - as a foot soldier and died aged 108 in 1821; and the second, to Martha Gunn (d. 1815): 'Peculiarly Distinguished as a bather in this town 70 years'. It clearly did her good, as she lived to be 88.