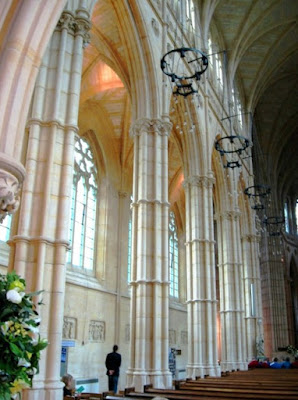 Arundel Cathedral is the Cathedral church for the Roman Catholic diocese of Arundel and Brighton. It dominates the skyline of Arundel and, along with the castle, from a distance gives it an almost European feel. The European element is perhaps hardly surprising, as the church was designed by J A Hansom (of Hansom cab fame) in a late French Decorated Gothic style, from about 1300. The Cathedral was paid for by the 15th Duke of Norfolk, and constructed in 1870-73.

Experts differ as to how successful the Cathedral is as a piece of architecture: it is too faithful as a pastiche, yet many of the details are incorrect for the style. Paradoxically, its uniform newness and the very high quality of the stone carving also give the interior a slightly clinical feel, compounded by the relative lack of ornament (there are few tombs or furnishings, for example).

However, there is no denying that its tall and elegant interior is an impressive space, and it is a lot more attractive than many Victorian churches. It also has superb acoustics for choral singing, and a practising choir added greatly to my last visit (and the Cathedral staff were very friendly, and a good less stuffy than other places I have visited).

The church has some lovely stained glass, including a moving depiction of the recently canonised English martyr, St Philip Howard, the 13th Earl of Arundel, who died in prison in 1595 aged 39, awaiting execution, accused of aiding some of the various Catholic plots against Elizabeth I.