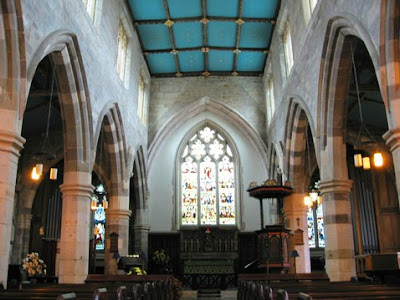 All Saints is one of York’s finest churches, and contains a wealth of interesting furnishings, along with impressive mediaeval glass.

Tradition states that the first All Saints was built here in 685AD for St Cuthbert, and a church certainly existed here in mediaeval times. However, the present church dates from the late 14th century, and has in its Perpendicular Gothic lines an architectural unity rare in this city of ancient churches. It was a Guild church, and shields from some of the Guilds are located at the end of the pews.

From the outside, the most distinctive feature is its octagonal tower, dating from around 1400, surmounted with one of the finest lanterns in the country. This really was a lantern in mediaeval times: a light was kept burning here to guide travellers into York, and inside the church are two of the huge and rather crude lenses used to focus the light.

The interior is spacious, if rather truncated: the original chancel was demolished to make way for a market in 1782. The attractive blue panelled nave ceiling dates from the 15th century, but it is the fittings and furnishings that provide the interest.

Chief of these is the glass: the three East windows are all by Kempe, and the West window dates from around 1370, and was brought from St Saviour’s in 1957. The series of panels depicting the Passion is claimed to be unique, and is certainly rare.

Other items of interest include an Anglo-Danish grave cover from the 10th century; an elegant 17th century pulpit dated 1634, from which John Wesley (1703-1791), the co-founder of the Methodist church, preached; a 15th century lectern; the aforementioned lantern lenses; a Lord Mayors’ Board (34 of them are buried here); and replicas of the helmet, sword and gauntlets of Thomas Percy, 7th Earl of Northumberland, who was executed in The Pavement in 1572 for leading a rebellion against Elizabeth I.