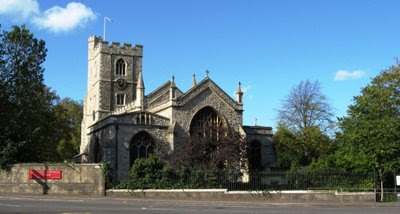 All Saints church is the ancient parish church of Fulham, located close to Fulham Palace, one of the mediaeval retreats of the Bishops of London.

It’s easily missed by traffic streaming past onto Putney Bridge, but this church and nearby Bishop’s Park are real oases from the hustle and bustle of London life.

There has been a church on the site for around 900 years: 'Fulanham’ is mentioned in a document dated around 704AD, although there is no mention of a church in the Domesday Book. However, a church is mentioned in 1154, and the list of vicars goes back to 1242.

The church tower was rebuilt in 1440, but there are few details about the rest of the church, other than its dedication to All Saints in 1445. It was, however, regularly flooded, and despite repairs and enlargement in 1840, it was decided to demolish it and rebuild it again, retaining only the tower. The architect was Sir Arthur Blomfield, (best known for Southwark Cathedral) and the new church was consecrated in 1881.

The tower remains the most dominant feature of the exterior: nearly 100ft high, it is built of Kentish ragstone with diagonal buttresses and a turret. The large West window probably dates from the 1840 restoration. The church behind is also of ragstone with Bath Stone dressings, in the Perpendicular Gothic style. Inside, the nave of five bays is spacious, with both north and south aisles, and leads to a chancel of three bays. There is a south Lady Chapel and an organ chamber on the north.

The church is entered through a porch on the north west, which contains a 14th Century door, a window with fragments of mediaeval glass from the original church, and a memorial to Elizabeth Limpney (1691- 1694).

Inside, the nave immediately impresses with its height. However, the glory of All Saints is its rich collection of 16th-18th Century memorials and monuments, mostly saved from the earlier church. Space doesn’t permit a full description here, but they include several to Bishops of London and some wealthy parishioners from the late 16th and early 17th centuries.

Three monuments, however, are worth especial mention. The first is to the south (left) of the chancel, of Lady Margaret Legh (d. 1603), upright and wearing a widow’s hood, with two of her deceased infant children: she holds one, tightly bound in swaddling clothes, looking like a mummy: to her left is another infant, similarly bound but bolt upright.

The second memorial, in the south aisle (and easy to overlook), is a rare diamond shaped Flemish brass to Margaret Svanders, wife of Gerard Hornebolt (d.1529). He, with his son and daughter, were Flemish painters who came from Ghent to the court of Henry VIII and founded the English school of miniature painting.

Finally, on the floor by the north west door is a memorial to Humphrey Henchman, (1592-1675), Bishop of London in 1666 during the Great Fire. He owned the property around St Paul’s Cathedral - including many properties let to booksellers. Even though their premises and stock were burned in the fire, he insisted that they continue to pay rent on their ruined properties. Although normal for the time, his harsh stance nevertheless saw him brought before the Courts, but he avoided conviction thanks to Parliamentary privilege.

Other furnishings of note include two fonts, one a primitive mediaeval tub font, the other an octagonal Gothic design of 1622; some handsome Jacobean rails in the sanctuary; and the west window, which contains some 17th century heraldic glass. The glass elsewhere is Victorian, and the chancel has some attractive encaustic tiles. The churchyard around is also an attractive place to wander, with many interesting tombs, including those of several more Bishops.

Today, the church has an inclusive, Liberal Catholic tradition, and a busy parish life with a great many groups and activities.