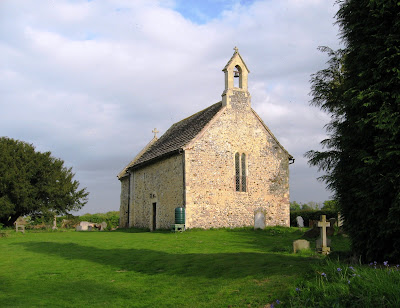 All Saints can lay a strong claim to being England's most hidden church. Although only yards from the busy A283, it lies across a small, thickly wooded valley from a narrow lane, only a diminutive wooden sign hinting that there might be a church here. To reach it, you follow a path falling steeply to the bottom of a small valley, across a wooden footbridge and rising back up again. As if to make it even harder to find, the lane is signposted 'Wiston', a mile further east than the turning for Wiston Park and House. On my visit, the path was lined with carpets of bluebells and ramsons.

The church itself is a small, simple two-celled structure, with a Norman nave (just 35ft long) lit by classicl round-headed Norman windows high up in the walls. Blocked arches abound, although the church guide assures us that the church was never larger. They remain a mystery.

The Chancel - Norman in plan, but rebuilt in the 14th century - is brighter, with a 14th century East Window and two Early English lancets lending a little more light. The walls have small fragments of homespun 14th century wall paintings, and the Chancel arch crude Romanesque decoration. Until 2004 this included an interesting horizontal figure carved on the impost on the North side, possibly some sort of fertility symbol, sometimes called a Sheela-na-gig. Sadly, this was destroyed by an act of vandalism - after 800 years. I hope it can be restored. More happily, to the right of the altar, a perfect Decorated Piscina dates from the 14th century. 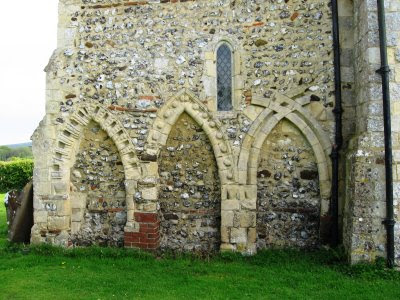 Of perhaps equal interest, however, are the various arches on the outside of the chancel, especially those on the north side (see above). Of late 12th Century date and of extraordinary quality, these too are something of a mystery: they clearly weren't intended for their present position. They may have come from the nearby Benedictine Priory at Sele and been inserted in the 14th century when the chancel was being rebuilt. Whatever their origin, they are a delight.