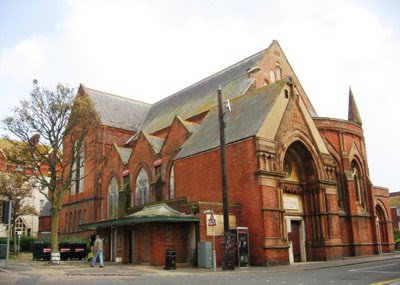 Rarely does such an unprepossessing exterior hide such a stunning space. From the outside, St Mary's looks like you average, run-of-the-mill Neo-Gothic Victorian church. It doesn't even look that large, and has the added humiliation of having had a public lavatory attached to one side. But once inside, you turn and find yourself in a cathedral-like space: a huge nave, an even larger crossing and a spectacular chancel and sanctuary. This is architecture as drama, writ large.

The church has had an interesting history: opened in 1827 to cater for the burgeoning suburbs of East Brighton, the original church was a rather handsome Neo-classical building, modelled on the temple of Nemesis in Athens. Alas, like many Regency buildings, it was badly built, and partially collapsed during building work in 1876.

The architect commissioned to design its replacement was William Emerson, known mostly for his work in India. St Mary's is his only church in the UK, and he chose the Decorated Gothic style for his new creation, albeit one with other stylistic elements: the aisle arches are round-headed and groups of Early-English lancets proliferate - all in red brick, with Bath stone detailing.

The arcades rise to Corinthian capitals, both in the nave and in the apse of the sanctuary. Cleverly, Emerson made full use of the changes in levels, first down from the entrance and baptistery into the nave, and then back up again into the sanctuary, to emphasise the height. (The nave is 40ft across and 60ft high.) The only element not completed was the tower, which was abandoned for lack of funds, although early drawings show what was intended.

The church has a wide array of Victorian stained glass, including an example by Kempe, although other workshops predominate. (The web-site has excellent pictures of all the glass). The furnishings are also of high quality, including a carved pulpit of Caen stone, and a marble font, which stands on a plinth of granite from the Schreckhorn mountain in the Bernese Oberland in Switzerland. This commemorates the second Vicar, Julius Elliott: an accomplished rock climber, he was the second to ascend the North Face of the Matterhorn, but died in 1869 after an apparently successful ascent of the Schreckhorn, at the age of 28.

The other notable feature is its organ, which is known for its tonal quality, enhanced by the excellent acoustics of the church.

The only downside to all this grandeur is that to-day's rather smaller congregation struggles to resource the scale of maintenance required of such a huge building. It needs generous visitors.