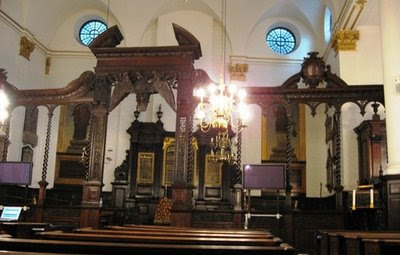 Tucked away behind the Bank of England, this is one of Sir Christopher Wren's many City churches, rebuilt after the Great Fire of London destroyed the earlier mediaeval church in 1666. Completed in 1692, the tower was added by Robert Hooke in 1698-1700.

Wren chose to respect the original (and rather skewed) ground plan of the mediaeval church, which retains a traditional appearance from the exterior, with a traditionally-shaped tower and spire, but with classical detailing, including a fine entrance portico with Corinthian columns.

Inside, the interior is pure classical: the south aisle is separated by two tall Corinthian columns with gilded capitals. The main interest of St Margaret's is its rich and varied 17th and 18th century furnishings, many of which have come from other churches. Indeed, the parish has absorbed a number of them (seven, in fact) over the years, reflecting the incredible density of churches in mediaeval London. They have wonderful names: St. Christopher, Le Stocks, St Olave Old Jewry, St Mildred Poultry. Sadly, all are now long demolished.

Back to the furnishings: pride of place goes to the two screens: the first separates the nave and sanctuary, and came from All Hallows the Great, demolished in 1894. It is a spectacular piece of carving, with a grand entrance arch, featuring a winged eagle under a broken pediment, and columns of intertwined barley twist lathe work.

The other screen separates the nave from the aisle, now a chapel. The lower part came from St Olave Jewry (as did the Chapel's reredos) and the upper part is by G F Bodley. The paintings of Moses and Aaron either side of the reredos, dated to 1700, came from St Christopher-le-Stocks, demolished in 1781. The reredos behind the main altar does belong to the church, and is a handsome 17th century classical piece, in the Corinthian style. The other original element is the font, thought to be from the workshop of Grinling Gibbons.

The organ is considered by some as one of the finest examples of English organ building, was built by George England in the 18th-century style and completed in 1801. Finally, the church walls and floors are filled with memorials, both from St Margaret's and the other churches incorporated into the parish over the years.

The church still has an active mission to City workers, as evidenced in its unusual service times - before work at 8h, a few lunch-time services, but nothing on Sundays. It is also home to a number of City of London Livery Companies.