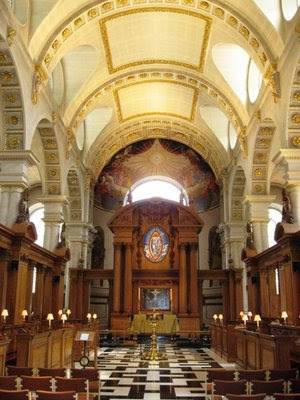 Rebuilt by Sir Christopher Wren in 1670-84 after the great fire of London, St Bride’s magnificent steeple is a familiar landmark across the City of London. It’s wedding-cake of octagonal and arcaded tiers rises 226ft (70m), making it Wren’s tallest.

The present building is actually the eighth church on the site, and the crypt contains the remains of Saxon foundations, now part of a museum describing the early history of this part of London. The church itself was heavily rebuilt after being gutted in 1940, but the neo-classical interior is a sympathetic rendering, rather than a copy, of Wren’s original.

St Bride’s is known as the church of the Press, until recently located in nearby Fleet Street. Those associations go back to the 1500s, when Wynkyn de Worde, William Caxton's apprentice, brought his press here. Wynkyn was buried in St Bride's in 1535. Other printers also set up shop nearby, and the link with the press has been maintained to this day.