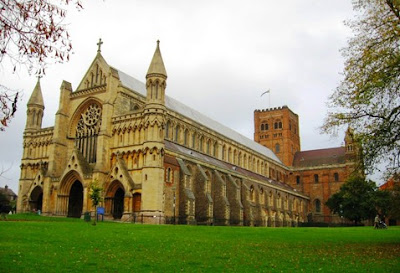 St Alban’s is one of England’s oldest towns. There has been a settlement here since the 1st Century BC, and in AD 43 the Romans chose the site for their city of Verulamium, which became the Capital of the Roman province of Britannia.

The city owes its modern name to a Roman soldier, Alban. He became the first Christian to be martyred on English soil, around 303 AD, for hiding and aiding the escape of a Christian priest named Amphibalus. A shrine is recorded here in early times, and St Germanus visited the site in 429 AD. Later, an abbey was established in his honour by King Offa in 739 AD, and in 1154 its abbot became Archabbot of England, making it the premier abbey in the land. After the Reformation, the church became the Parish church of St Alban’s, and was elevated to cathedral status in 1877.

Little remains of Offa’s abbey, which was largely made of wood. The Normans began to rebuild it in 1077 and, given the lack of building stone in the area, instead used Roman bricks recycled from the earlier town: the church therefore contains substantial amounts of fabric, if not architecture, dating from the 3rd and 4th Centuries. The south transept also contains stone columns from the earlier Saxon church.

The early Norman work is unusual in that the Roman bricks were too hard to carve, and the walls were therefore plastered and painted with geometrical designs. Much of this decoration survives, together with delicate frescoes dated from around 1220. The Nave is unusual in being over 300ft (100m) long, and but also shows a distinct change of style from the Romanesque style of the Normans to the later Gothic work: most of this is in a beautiful Decorated Gothic style, especially that in the Lady Chapel. The church was essentially finished in its present form in 1323.

As well as the frescoes, there is much of interest elsewhere in the church. Throughout the church are examples of impressive carving from the Decorated Gothic period, as well as fragments of mediaeval stained glass. The altar screen and painted ceiling in the sanctuary are both impressive works from the 15th century, and the floor contains a beautiful pavement of Victorian glazed encaustic tiles by Minton & Company.

Behind the Sanctuary lies St Alban’s chapel. At its heart lies the 13th century marble shrine to St Alban, rebuilt from the original fragments after it was destroyed in the Reformation. It continues to be a major site of pilgrimage. To the north is a carved oak Watching Loft dating from 1400, and to the south the impressive Perpendicular monument of Humphrey, Duke of Gloucester and brother of Henry V, completed in 1447. Beyond the shrine is the beautiful Lady Chapel, completed around 1315.

The church has an excellent modern refectory, bookshop and a small gift shop. There are regular guided tours and wheel-chair access is available on request.