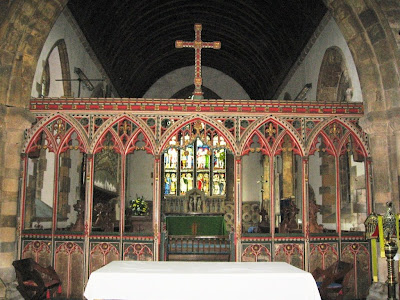 St Mary’s is a distinctive landmark on the A361 from Chipping Norton to Banbury, its 198ft spire dominating the landscape for miles around.
It has always been an important church, benefitting from Royal patronage from its earliest days. There was probably a church here in Saxon times, but the first written record is when William I granted it to Westminster Abbey in 1067. King Stephen endowed a chantry here, and Henry II made a gift of its endowments to Godstow Abbey, an act clearly important enough for Westminster Abbey to appeal – unsuccessfully, as it turned out – to the Pope.

So much for its history. The building we see to-day is a text-book of mediaeval church architecture: it has some remnants from the Norman period, a 12-13th Century Early English nave and porch, a 14th Century Decorated Gothic tower and chancel, with some spectacular Perpendicular Gothic additions from the 15th century.

The first thing that strikes you on entering the church is the size of the building: in the 14th century, the aisles were doubled in size to the width of the nave, giving the church a spacious square floor-plan. The first furnishing of note is the font, a fine and rare example in the perpendicular style of the 15th century. Above, the roof is supported on corbels in the shape of human heads, in the shape of Kings, Queens, Bishops and a lady with a fine 15th century horned head-dress. Across in the north aisle is a remnant of a wall painting of St Christopher, separating the aisle from the north transept, an elegant pillar with an incredible capital carved with the heads of knights and ladies with linked arms.

The other feature of the nave is the rood screen, a gift from Cardinal Wolsey in the 15th century. Despite subsequent defacing by iconoclasts, it still retains its painted panels, although some of the remains are very faint. The pictures represent saints and the doctors of the early church. The chancel has a fine Norman door-head from the period of King Stephen, with fish-scale, foliage and lozenge patterns. Opposite, the decorated windows have re-used some of the earlier Norman arches, with more zig-zag patterns.

But the most dramatic addition is the large Milcombe Chapel, a bold exercise in 15th-century perpendicular. Huge panel windows fill every side. On one wall is a vivid and colourful 15th Century wall-painting depicting the life of a martyr, with different episodes all shown in the one picture. The chapel’s west wall is dominated by the confident memorial to Sir John Thorneycroft (d. 1725). When built, this was sited against the Chapel’s East window, effectively blocking it, much to the ire of the congregation. It was moved to its present, more appropriate, location during the 19th century restoration by G E Street.

The exterior of the church is easily a match for the interior. The Milcombe Chapel sports huge and well-preserved gargoyles, but it is the spire, west door and north wall for which the church is renowned: here, in 1340, a series of elaborate decorative carvings was added, around the door and the base of the spire, and along the cornice of the north wall. The West Door scheme depicts the Last Judgement, but the those on the tower and wall carry more whimsical themes, and include two monkeys riding a cat, a main whistling, two men sword fighting and dogs looking at a rabbit in a thicket. Piety can indeed have a sense of humour.

The graveyard is pleasantly wooded, with some attractive 18th-century tombstones. The effect is spoiled only by the roar of traffic from the adjacent road. How many passing motorists realise the glory that they are passing at speed?
Church Street, Bloxham, Oxfordshire, OX15 4PY
Posted by David J at 13:02