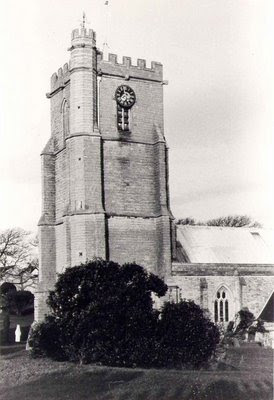 St Andrew's is a true sea-side church. Built on sand dunes, it was originally only feet from the shore, and the wind and smell of the sea are ever-present.
Although of uncertain foundation, there was certainly a church here in the 11th century, but most of the present structure dates from a re-building in the early fourteenth century, completed in 1315. The interior is whitewashed, with Decorated Gothic windows and a Victorian gallery and chancel. Although pretty enough, the two real reasons for a visit are the leaning tower and its sculptures. It is grade I listed.

The tower leans because it was literally built on sand - in contravention of the biblical parable. The main lean, to the north, is about 5 degrees off the vertical, although it also leans slightly to the west, too. It is clear that the lean began during its building, as attempts were made higher up the tower to correct the lean. As a result, the tower has a gentle curve. The effect is heightened by the fact that the windows and doors were inserted true to the vertical.

The marble sculptures, designed by Sir Christopher Wren and carved by the famous wood sculptor Grinling Gibbons (1648-1721), have a remarkable story. Originally commissioned in 1685 by James II for the Chapel of Whitehall Palace, they comprise a carved reredos and cherubs flanked by angels. Moved in 1706 to the high altar of Westminster Abbey, they were acquired in 1820 by the then Bishop of Rochester, who was also Vicar of Burnham, and moved to St Andrew's. The reredos was placed behind the altar, but the cherubs and angels have subsequently been located around the church. Thus this small parish church has marble sculptures of high quality.

Other items of interest are the barrel-vaulted roof, a fine canopied pulpit and an elegant brass chandelier, all Jacobean in date. Oddly, the roof and pulpit are painted in a rather gaudy lime-green and gold scheme. There are also fragments of mediaeval glass in the south-west nave window.

After your visit, stroll through the pretty church-yard and the adjacent sunken gardens, down to the sea, and a view of Burnham's unique light-house on legs.