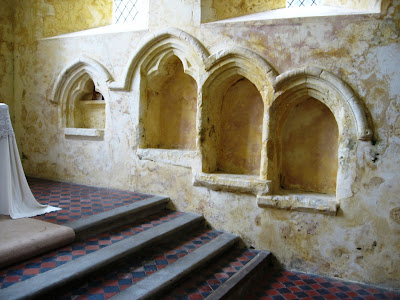 North Stoke is a small village, set in an idyllic location above a spur of the River Arun. Reached by a narrow lane off the B2139 adjacent to Houghton Bridge and Amberley station, this is the only road access. The church is no longer in regular use, although still consecrated, but in the care of the Churches Conservation Trust. Set in a wooded churchyard, next to a lovely old farmhouse, it seems almost forgotten.
The reason for its preservation is that it is a text-book example of a mediaeval village church, virtually unaltered since the 14th century. Although small, it is perfectly cruciform in plan, with transepts of equal height to the nave and chancel. The nave is certainly Norman, but both chancel and transept arches are Early English.

Other items of interest include a fine three-tiered sedilia and a piscina in the chancel, corbels of a sheep's head and a human hand, and fragments of very fine mediaeval glass, rare survivors dated from 1290-1310. An ancient, plain font dominates the entrance to the nave and fragments of wall paintings outline the chancel arch.

Curiously, although there are some charming 17th and 18th century headstones in the churchyard, the interior walls are devoid of funeral monuments. Together with the paucity of other furnishings (there's not even a pulpit), this gives the interior a slightly empty feel, despite the architecture. Perhaps this is in keeping with its lonely isolation?