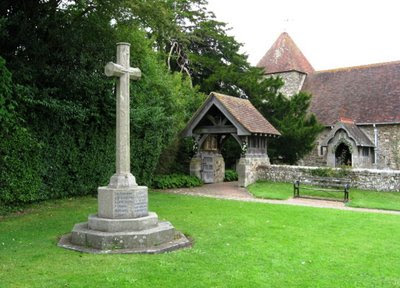 East Chiltington is a small village situated at the end of a lane, itself off a small side road on the B2116 from Lewes to Burgess Hill. Too small to warrant a dedication, the church was originally a chapel before it became the parish church. It's a wonderfully tranquil spot.
The church is mediaeval in origin, with a 12th century nave and a squat 13th century tower, with a tiled pyramidal cap. It has a very attractive exterior, more so because of the ancient yew that guards its entrance - said to be at least 1,500 years old. The crown of the tree has long since disappeared, and to keep it upright the villagers have filled the trunk with concrete. Very odd, but it seems to have worked.

Once inside, the atmosphere betrays the work of heavy Victorian restoration which, despite the lovely scale - small and intimate - has nevertheless left feeling it a little soulless, especially the rather large and new-looking chancel arch, the neat tiled floor and modern pews.

There are a few items worth noting, though: there's an original 12th-century Norman round-headed window, barely 6 inches wide, piercing the South wall next to the porch, and the inside arch of the South Door also looks ancient. Most of the other windows are Victorian inserts. The roof, with its heavy tie beams, is 17th century, and the pulpit and solitary bell dates from the 18th.

Nevertheless, it's worth a look if you are in the area walking, or visiting the nearby Jolly Sportsman pub.