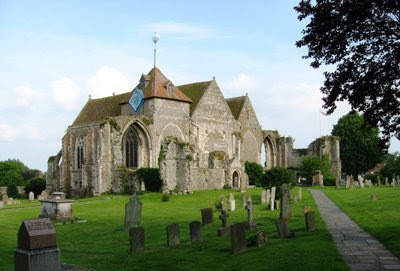 Winchelsea is reputedly the smallest town in England. It was rebuilt by Edward I on the present elevated site in 1277 after floods destroyed the old town, and fortified against French invaders. To-day it feels as if in a time warp, its quiet streets full of rustic clapperboard and tile-hung houses and lovely gardens. Laid out in perfect grid form, it is the first example of town planning in England. It was also one of the famous Cinque Ports, which provided ships and men to defend the coastline in return for certain privileges.
Wincheslea now feels more like a village than a town, despite its impressive location and fortifications. At its heart, set in a huge open green space, is St Thomas's church. Built along with the town in the 1280's, it also came under the patronage of Edward I.

Unfortunately, repeated attacks by the French severely damaged both the church and the town, and the economy of the town never recovered. As a result, the church to-day is but a remnant of a once bigger and grander building: only the chancel and its aisles survive, together with the ruins of the transepts. It is not clear if the nave was ever built - had it been, it would have been jaw-dropping.

But the quality of what is left reflects its royal patronage. Clustered piers soar to a lofty roof, and the windows have beautiful Decorated tracery, surrounded with blind tracery and shafts of purbeck marble. These form a suitable setting for its magnificent mediaeval tombs, all of astonishing quality and worthy of any cathedral.

In the north aisle, are a knight, lady and gentleman, executed in black marble, under lavish Decorated Gothic canopies. It is thought they may have been brought from the old church, now lost to the sea. Better still are the tombs of the two Alard brothers, one of whom was an admiral in Edward I's fleet. Resplendent in their armour, and under magnificent canopies, they are worth a detour on any itinerary.

Also noteworthy is the modern glass by Douglas Strachan, regarded as the Scotland's greatest stained glass artist. Commemorating the suffering of World War I, they have bold, swirling patterns and colours.

After your visit, wander around the lanes of the town before visiting the Court Hall musem: like the church, this dates from the 1280's, albeit much rebuilt over the years. Rest your feet afterwards in the 'New Inn' pub or the tea rooms nearby.